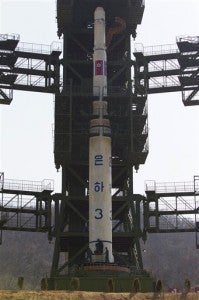 MANILA, Philippines – The Department of Foreign Affairs (DFA) on Monday said that though it had yet to receive formal notification of North Korea’s planned rocket launch this month, it was urging the country to abort its plan.

“We strongly urge North Korea not to proceed with its planned launch and abide by United Nations (UN) Security Council resolutions which called for the abandonment of its ballistic missile program in a complete, verifiable and irreversible manner,” DFA spokesperson Assistant Secretary Raul Hernandez said in a press briefing.

Earlier reports noted that the Korean Committee for Space Technology, in a statement carried by the Korean Central News Agency, said it planned to launch a working satellite after experts had studied mistakes made during a failed rocket launch in April. The news agency noted that the launch of the long-range rocket was scheduled between December 10 and 22.

Hernandez said the DFA had yet to receive information from the embassy in Beijing or the country’s resident ambassador in Bangkok regarding the issue.

An earlier report by Agence France Presse noted that the UN Security Council last week had warned North Korea against the launch after speculations that it was preparing for a new missile test.

It said that In April, North Korea failed with a much-hyped launch of an Unha-3 rocket that Pyongyang also said was aimed at placing a satellite in orbit.  With reports from AFP