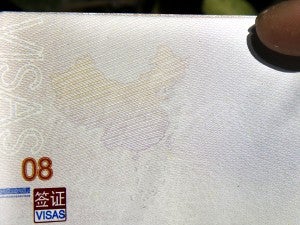 A Chinese man holds up a Chinese passport with details on a page that shows dashes which include the West Philippine Sea as part of the Chinese territory outside a passport office in Beijing, China, Friday. AP

MANILA, Philippines—Even as the furor over its release of new electronic passports bearing a controversial map of China has yet to dissipate, Beijing has gone on to release an official map of Sansha City, the new administrative domain it created in the disputed West Philippine Sea (South China Sea) earlier this year to international outcry.

This has posed yet another challenge to the Philippines, which has yet to decide how it would handle the visa applications of Chinese citizens bearing e-passports stamped with the protested map, which declared disputed islands in the South China Sea as part of China’s sovereign territory.

Xinhua, China’s state news agency, reported over the weekend that China has released to the public a detailed map of Sansha City, a military garrison and administrative arm based in the Paracel islands that China has created to govern the disputed Spratlys despite conflicting claims with at least six other Southeast Asian neighbors.

While the Philippines has no claim to the Paracels, the Department of Foreign Affairs  protested China’s establishment of Sansha City in August, calling it “unacceptable” as its administrative scope include territories in the Spratlys being claimed by the Philippines.

The Philippines has asserted ownership over the Kalayaan island group in the Spratlys and has maintained a modest military and civilian presence on Pag-Asa island within the island chain.

The United States also criticized the city’s creation, concerned that it might fuel tensions among claimant countries.

Meanwhile, the DFA said an interagency committee was wrapping up talks on how the Philippines should regard China’s new e-passports that displayed images of disputed territories in the West Philippine Sea.

The Philippines and Vietnam protested the release of the new Chinese passport last week as it would force recognition of China’s ownership of the contentious islands if the Chinese e-passport were to be stamped entry into their borders.

Vietnam has refused to stamp the Chinese passports, issuing visas instead on a separate piece of paper.

Pending the recommendations of the interagency committee, the Philippines continues to process Chinese visa applications.

“It’s not the fault of the citizen that his passport carries such a map. Our immigration officials will respect their passport,’’ he said.

But Sen. Miriam Defensor-Santiago said the Philippines should do what Vietnam has been doing in rejecting the Chinese e-passports and refusing entry to anyone carrying them.

“If we don’t like what is printed in their passport, we have the sovereign right to refuse to allow the person to enter,” Santiago told reporters.

“As long as you’re within Philippine land, sea or air territory, you have to comply with what the Philippines wants. That is the meaning of sovereignty in international relations. If we don’t like what is printed in a passport, we can make the person go away from our territory without having to explain why,” she added.

Santiago said Foreign Affairs Secretary Albert del Rosario and Justice Secretary Leila de Lima should coordinate with each other so that the Bureau of Immigration could be directed to “reject at the border anyone who is carrying a passport that violates the Philippine claim to the West Philippine Sea.”

Such an act on the part of the Philippines couldn’t be characterized as a provocation since it would only be acting within its rights, she said.

“We are not the provocateur. They are. They are deliberately infringing on our sovereignty when they do that,” said Santiago, a magistrate of the International Criminal Court based in The Hague.

Sen. Panfilo Lacson, chair of the Senate committee on national defense and security, said the Philippines should come up with a stronger reaction to the new Chinese passport.

“If they would like to have a passport like that, so what? We can also create our own passport. We can include the entire Pacific area, include some of their areas there, so it doesn’t matter,” Enrile said.

Accepting the passports doesn’t mean the Philippines is recognizing China’s claim to the disputed territories, according to Enrile.

Sansha City was established in June as a prefecture of China’s southern Hainan province, covering the Paracels as one of three townships of the city.

The Paracels, a group of islands consisting of about 30 islets, sandbanks and reefs in the South China Sea, which is claimed by Vietnam, Taiwan and China. Chinese and Vietnamese forces occupied parts of the Paracels before 1974 when they fought a war, after which Beijing took over all of the Paracels.

According to the Xinhua report, the Sansha City map “displays the geological locations, oceanic terrain, natural resources, marine and land transportation, airports and harbors as well as administrative boundaries of the city and the islands”.

The map, which also bears images of 38 major islands and reefs in the disputed waters, became available to the public in major bookstores on Nov. 24.