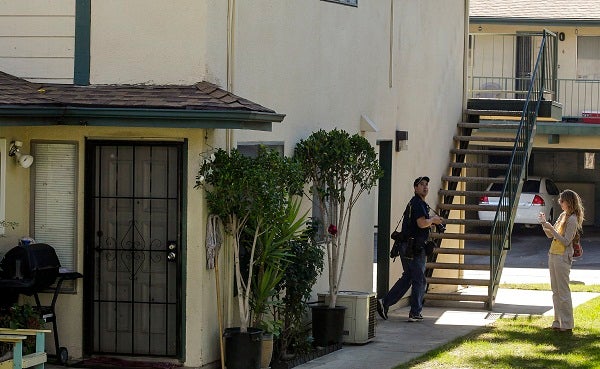 Members of the media gather outside the home of 21-year-old Miguel Alejandro Santana Vidriales of Upland, Calif. Tuesday, Nov. 20, 2012. Vidriales is one of four Southern California men who have been charged with plotting to kill Americans and destroy U.S. targets overseas by joining al-Qaida and the Taliban in Afghanistan, federal officials said Monday. In one online conversation, Santana told an FBI undercover agent that he wanted to commit jihad and expressed interest in a jihadist training camp in Jalalabad, Afghanistan. AP/Damian Dovarganes

An indictment filed Wednesday charges Ralph Deleon, Miguel Alejandro Santana Vidriales and Arifeen David Gojali with conspiracy to provide material support to terrorists. If convicted, they each could face up to 15 years in prison.

The three men were arrested earlier this month. Federal authorities say they planned to board a plane headed for Istanbul and eventually make their way to Afghanistan. Authorities allege the men were to meet up with a ringleader, 34-year-old American Sohiel Omar Kabir, who also is facing terrorism-related charges.