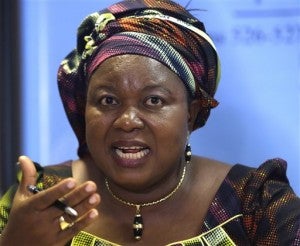 Joy Ngozi Ezeilo, UN Special Rapporteur on Trafficking in Persons, speaks about her report on her fact-finding mission in the Philippines, Friday Nov. 9, 2012, in Makati city. Ezeilo said one of the “issues of concern” is the lack of accurate data and somewhat low-level of awareness knowledge and skills among government authorities to identify cases of trafficking in persons. AP PHOTO/BULLIT MARQUEZ

MANILA, Philippines – The Philippines needs to re-assess its policies and strategies to effectively combat rampant human trafficking both in and out of its borders, a United Nations (UN) official said Friday.

“The Philippines is undoubtedly a source country for human trafficking….and the problem is not declining,” Joy Ngozi Ezeilo, UN’s Special Rapporteur on Trafficking in Persons, told reporters in a press conference in Makati City.

Ezeilo conducted a five-day fact finding mission in the country, and visited Manila, Cebu, and Zamboanga, to examine the situation of trafficked persons and the impact of the implementation of the country’s anti-trafficking measures.

The Philippines has been criticized for its failure to effectively deal with the issue, and suffered landing on the United States (US) Tier 2 Watch List.

In 2011, however, the country was removed from the list, with the report saying that although the Philippines “still does not fully comply with minimum standards to eliminate trafficking, Manila is making significant efforts to do so.”

While she commended the country for taking “encouraging steps” and making significant progress in terms of adequate legislation and bilateral agreements with stakeholders, Ezeilo lamented how the root causes of trafficking – poverty, youth unemployment, gender inequalities, and demand for cheap, and exploitative labor – were not being effectively addressed.

She noted how the situation grew to be far more complex, with clandestine operations making detection of traffickers difficult, and with cases where communities and families were involved in the “human trafficking chain.”

“Sexual exploitation of children, especially girls, including for sexual tourism, is extremely common, socially and culturally tolerated in the country,” she said.

She described as alarming the rate of impunity with which human trafficking was being carried out in the country, which she attributed to the low, low rate of prosecution of trafficking cases.

She also highlighted how the country seemed to pay less attention to trafficking for labor exploitation, with only two convictions for the cases reported up to date.

“There must be a balance….we need to prevent trafficking and promote safe migration, while ensuring at the same time that people’s rights to movement and migration are not violated,” she said.

Ezeilo criticized the lack of standardized collection of information and accurate data on victims, and the “low level of awareness, knowledge, and skills amongst government authorities to identify cases of trafficking in persons.”

She added that the low number and incapacity of labor inspectors and the high turn-over rate of officers hampered the prevention and prosecution of trafficking cases.

She also noted that while there were efforts to replicate the policies for implementation of the anti-trafficking law in regional and local levels, the present structure of layered and differentiated levels of implementation where-in jurisdiction fell on different ministries, failed to effectively promote the law.

“Enforcement of law and assistance to the victims is not uniform in all areas of the country and depends on the political will of the local governments,” she said.

“Lack of resources make it difficult for institutions to provide a comprehensive assistance for the victims, and they are once again placed at an increased risk of falling prey traffickers,” she said.

Ezeilo warned against the phenomenon of “new technologies” such as social networking sites being used by human traffickers to lure victims, saying that this was prevalent amongst the most excluded sectors of society, who resort to trafficking of children for purposes of cybersex and pornography, to overcome their “dire economic situation.”

She challenged the government to use the same technologies as forms of prevention, particularly in massive information campaigns that would appeal to the people, particularly the youth, and would send “a strong message against the cultural acceptance of both human trafficking and sexual exploitation of children.”

As part of her recommendations, she said the government should also use new technologies to strengthen its border control.

She also called for the creation of a specialized court to fast track the trials of trafficking cases and to ensure that witnesses and victims were protected and assisted.

The government, she noted, should scale up initiatives to address the root causes by creating alternatives including employment, educational and training opportunities for livelihood sustainability.

“I urge the government to continue to show leadership and mobilize adequate resources to combat trafficking in persons, protect and assist victims, while increasing opportunities for legal, gainful and non-exploitative labor migration,” Ezeilo said