PH embassy in touch with Filipinos in Libya amid fresh clashes 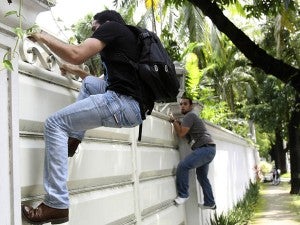 MANILA, Philippines—The Philippine Embassy in Tripoli is closely monitoring the security situation in Libya in light of the recent resurgence of violence amid the Arab country’s transition into a democracy.

Department of Foreign Affairs spokesperson Assistant Secretary Raul Hernandez said the Tripoli post has been in close touch with the Filipino community around Libya as the nation pursues reform a year since the overthrow of dictator Moammar Gadhafi.

“Our embassy constantly monitors the situation in Libya and is in touch with the 2,600-strong Filipino community there,” Hernandez said Tuesday.

The Embassy recently heeded the request of Libya’s health ministry to redeploy 26 nurses and medical staff earlier pulled out of the Alkhadra Hospital in the western Libyan City of Bani Walid, where violence again erupted this month between government forces and pro-Gadhafi militia.

International reports showed that at least 26 people were killed and hundreds were injured due to fighting last week in the city, home to supporters of the late Gadhafi. But the DFA said the security situation is getting better.

“Our Embassy in Tripoli last week approved the request of the Ministry of Health Libya for the immediate redeployment of 26 nurses [and] medical staff to Alkhadra hospital. They were evacuated by our embassy to Tripoli from Bani Walid on October 4 because of the recent security problem in that city,” said Hernandez.

“But from various accounts, the overall security situation in Libya is improving and a smooth transition to democracy has been undertaken,” he added.