In an interview with Jupiter Torres of “Kliq Music” on Radyo Inquirer 990AM, Michael Ubac said that Aquino also had a meeting with Governor General Jerry Mateparae.

Ubac said Aquino is likely to share with Key the development with the recently signed Framework Agreement forged between the Philippine government and the Moro Islamic Liberation Front.

There is likely to be discussions on defense cooperation and trade relations, Ubac said. 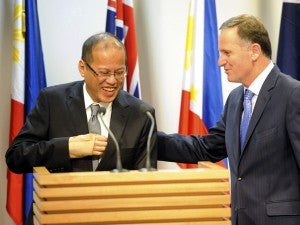 Aquino began his state visit to New Zealand Monday by meeting the Filipino community in New Zealand. The President will then fly to Canberra on Wednesday for a state visit to Australia on the invitation of Prime Minister Julia Gillard.