Priest linked to sex abuse in US, expelled by Dominicans

Who is Msgr. Cristobal E. Garcia? 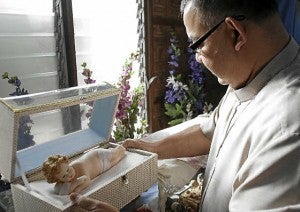 MSGR. CRISTOBAL Garcia shows a miniature Sto. Niño made of ivory that is kept in a box in Collegium Societatis Angeli Pacis Immaculate Heart of Mary Refuge in Cansojong, Talisay City, in this photo taken on Sept. 24. LITO TECSON/CEBU DAILY NEWS

Belonging to the Archdiocese of Cebu, he is the head of the Commission on Worship; the rector of the Archdiocesan Shrine of Jesus Nazareno in Cansojong, Talisay; and director of the archdiocese publications, “Bag-ong Lungsuranon” and “Mag-ambahan Kita,” according to the 2008-2009 Catholic Directory of the Philippines.

His high-profile ministry is a far cry from his situation some 20 years ago when he was expelled from the Dominican Order. Garcia then was working in the Catholic Archdiocese of Los Angeles.

His expulsion reportedly came after a nun told police that an altar boy had been found in his bed in a Los Angeles rectory.

According to a listing from the Catholic Archdiocese of Los Angeles that was reported in the Los Angeles Times, Garcia was accused of  “molesting two youths” from 1980 to 1984.

Garcia, in a Dallas Morning News interview at his religious compound, said that he did have sex with two altar boys, but claimed he was the one who was “seduced and raped,” a charge his accusers called absurd. A plaintiff, Paul Corral, said he had obtained a financial settlement.

Garcia said he had been a target because of his family’s wealth. He said the cardinal “gave me clemency” after reviewing a psychological report on him and material from the Dominicans.

According to the same Dallas Morning News article, Garcia was never criminally charged. Before the cases against him could prosper, he  left the United States for  Cebu, his hometown, where he continued to serve. In 1997, he was given the title of monsignor.

Read Next
Santiago: Enrile may have revealed state secrets
EDITORS' PICK
A laptop that maximizes your WiFi so you can maximize your productivity
Why Tagle is a leading papal contender
In Borongan, nuns play hoops (not mahjong)
Powered by style, innovation and passion
House energy committee chair Arroyo bats for cheap electricity
KWF has no power to ban, censor written works – Lagman
MOST READ
Why Tagle is a leading papal contender
Zubiri on SRA mess: Shameful, disgusting
SRA officials should resign after ‘illegal sugar order’ – Zubiri
Arjo Atayde reveals proposal to Maine Mendoza was ‘more than a year’ in the making
Don't miss out on the latest news and information.