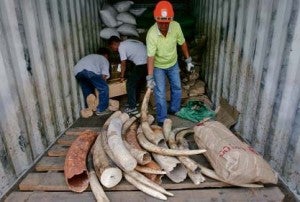 ELEPHANT tusks from Tanzania were found inside two container in this photo taken in Manila on May 20, 2009. INQUIRER FILE PHOTO

In March 2010, smuggled elephant tusks estimated to be worth P3 million were stolen from the Ninoy Aquino Parks and Wildlife Nature Center in Quezon City, where they had been stored.

The ivory tusks, weighing close to 800 kilograms, were part of the nearly 4,500 kg of ivory tusks worth about P21 million which were seized by the Bureau of Customs at South Harbor in May 2009. The tusks were turned over to the Department of Environment and Natural Resources (DENR). These were discovered hidden among plastic waste loaded in two 20-foot container vans that had come from Tanzania.

Following the loss of the tusks, then Environment Secretary Horacio Ramos ordered the filing of administrative charges against a park superintendent of the DENR’s Protected Areas and Wildlife Bureau, which oversees the park.

In June 2006, the Bureau of Customs said it lost elephant tusks in its custody, reportedly worth around P30 million. The bureau claimed the tusks were lost while in the custody of Asian Terminals Inc., where a 40-ft container van containing a  shipment of tusks and mineral stones was being kept since November 2005.

A day after saying it had lost the tusks, customs and environment agents raided a religious store in Sta. Cruz, Manila, which had been identified as the destination of the lost tusks.

Authorities confiscated 94 images made from ivory, 35 tusks and 81 kilos of scrap from the molded tusks at the Our Lady of Manaoag religious store, and seized a number of tusks from the shop owner’s house in Parañaque City.