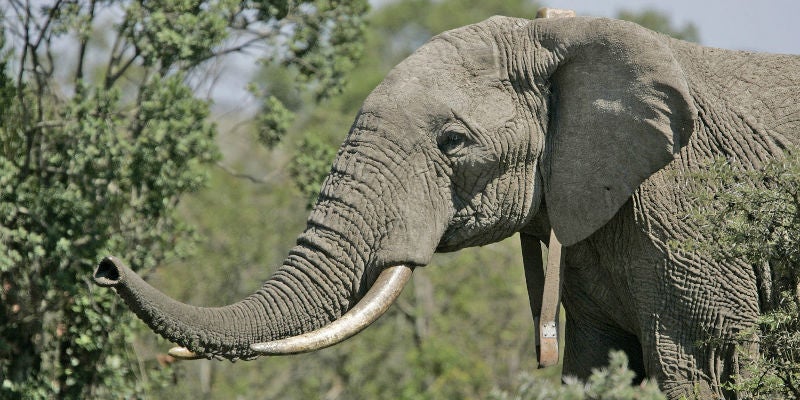 SAVE THE ELEPHANTS Kimani, a huge bull elephant cared for in the Ol Pejeta conservancy near Mt. Kenya, Africa, wears a collar containing a SIM card. The conservation group Save the Elephants spearheads the project where it places mobile phone SIM cards on elephants’ collars then sets up a ‘geofence’ using a global positioning system that mirrors the conservatory’s boundaries. The elephants can then be tracked, saving them from poachers. AP

Thousands of elephants are butchered every year for their ivory tusks that are carved into religious objects, including the most-prized Sto. Niño (icon of Jesus Christ as a boy) in the Philippines, a National Geographic investigation of the direct link between religion and ivory smuggling shows.

The country has become one of the destinations of the illegal ivory trade mainly because Filipinos are fond of religious statues made only of the finest materials, said the cover story of the  magazine’s October issue titled “Ivory worship.” It was written by Bryan Christy, who visited the country five times for the story.

Christy went to Cebu and met one of the best known ivory collectors in the country, Msgr. Cristobal Garcia. He is “the leader of a group of prominent Sto. Niño collectors who display their icons during the Feast of the Sto. Niño in some of [the province’s] best shopping malls and hotels,” the report said.

“His anteroom is a mini-museum dominated by large, glass-encased religious figures whose heads and hands are made of ivory: There is an ivory Our Lady of the Rosary holding an ivory Jesus in one, a near-life-size ivory Mother of the Good Shepherd seated beside an ivory Jesus in another. Next to Garcia’s desk a solid ivory Christ hangs on a cross,” it said.

They are not just investments but heirlooms as well, said the NatGeo report.

“Many believe that what you invest in devotion to your own icon determines what blessings you will receive in return. For some, then, a fiberglass or wooden icon is not enough. For them, the material of choice is elephant ivory,” it added.

For a Third World country where most people are living below poverty line, some may see this devotion as lavish but for others, it is “an offering to God.”

“The elaborate displays [of Sto. Niño] are often owned by families of surprisingly modest means. Devotees have opened bankbooks in the names of their ivory icons. They name them in their wills,” it said.

The report said some Filipinos believed that the Sto. Niño de Cebu (Holy Child of Cebu) was Christ himself. It noted that 16th century Spaniards “declared the icon to be miraculous and used it to convert the nation, making this wooden statue, housed today behind bulletproof glass in Cebu’s Basilica Minore de Sto. Niño, the root from which all Filipino Catholicism has grown.” The Sto. Niño is believed to be a replica of the icon devotees believe Ferdinand Magellan brought to Cebu in 1521.

“I don’t call it extravagant,” said Fr. Vicente Lina Jr. (Father Jay), director of the Diocesan Museum of Malolos and curator of his archdiocese’s annual Sto. Niño exhibit). “‘I call it an offering to God.’ He surveys the child images, some of which are decorated in ‘lagang,’ silvery mother of pearl flowers carved from nautilus shells,” said in the report.

“When it comes to Sto. Niño devotion too much is not enough. As a priest, I’ve been praying, ‘If all of this stuff is plain stupid, then God, put a stop to this,’” Father Jay was quoted as saying in the report.

He went as far as saying that the ivory used for the statues were smuggled but for him, “it is like straightening up a crooked line.”

“Father Jay points to a Sto. Niño holding a dove. ‘Most of the old ivories are heirlooms,’” Lina said. “‘The new ones are from Africa. They come in through the back door,’” he was quoted as saying.

“‘It’s like straightening up a crooked line: You buy the ivory, which came from a hazy origin, and you turn it into a spiritual item. See?” Lina said, with a giggle. “His voice lowers to a whisper. ‘Because it’s like buying a stolen item,’” the report said.

“If this allegation is true, this illegal wildlife trade would be an international embarrassment for the Philippines and the Filipinos. This must stop,” said Antonio Oposa Jr., an environmentalist lawyer.

Oposa said his group was studying other possible legal actions it may take.

“[If these were true,] we see violations of the CITES (the Convention on International Trade in Endangered Species of Wild Fauna and Flora), Wildlife Conservation Act, Anti-Fencing Law, Customs Code and others,” he said.

Without judging before hearing, Oposa said his group had asked the Department of Justice, National Bureau of Investigation and Department of Environment and Natural Resources to investigate the people responsible for the illegal trade in the country.

“We have also asked the Interpol to conduct an investigation on the people behind this illegal wildlife syndicate,” he said.

“It has long been known in the international circles that the Philippines is a source, a buyer and a conduit in the illegal wildlife trade. This must stop,” Oposa added.

Christy said he met with Garcia to understand the country’s ivory trade and to get a lead on who were behind 5.4 tons of illegal ivory and 7.7 tons that customs agents seized in Manila in 2009 and 2005, respectively, and 6.1 tons bound for the Philippines seized by Taiwanese authorities in 2006. He said the seizures represented 1,745 elephants assuming an average of 10 kg of ivory per elephant.

New ivory gets into the country from Africa through Muslims from Mindanao by bribing authorities along the way, according to Lina.

“And you just keep on paying so many people so that it will enter your country,” Lina told Christy.

In the report, Garcia told Christy how he could smuggle an ivory Sto. Niño into the United States.

“‘Wrap it in old, stinky underwear and pour ketchup on it … so it looks shitty with blood. This is how it is done,”’ Garcia told Christy.

“Garcia gave me the names of his favorite ivory carvers, all in Manila, along with advice on whom to go to for high volume, whose wife overcharges, who doesn’t meet deadlines. He gave me phone numbers and locations,” Christy said.

“If I wanted to smuggle an icon that was too large to hide in my suitcase, I might get a certificate from the National Museum of the Philippines declaring my image to be antique, or I could get a carver to issue a paper declaring it to be imitation or alter the carving date to before the ivory ban. Whatever I decided to commission, Garcia promised to bless it for me,” the NatGeo writer said of Garcia’s advice to him.

Christy said in the report that “a few families control most of the ivory carving in Manila, moving like termites through massive quantities of tusks. Two of the main dealers are based in the city’s religious-supplies district, Tayuman. During my five trips to the Philippines I visited every one of the ivory shops Garcia recommended to me and more, inquiring about buying ivory.”

“More than once I was asked if I was a priest. In almost every shop someone proposed a way I could smuggle ivory to the US. One offered to paint my ivory with removable brown watercolor to resemble wood; another to make identical hand-painted statuettes out of resin to camouflage my ivory baby Jesus. If I was caught, I was told to lie and say  ‘resin’ to US Customs. During one visit a dealer said Monsignor Garcia had just called and suggested that since I’d mentioned that my family had a funeral business, I might take her new, 20-pound Sto. Niño home by hiding it in the bottom of a casket. I said he must have been joking, but she didn’t think so,” Christy said.

The Philippine Daily Inquirer repeatedly called Garcia through his two mobile phones on Monday afternoon but there was no answer. It was learned that the monsignor was on sick leave and was in Manila.

Christy said the Philippines’ ivory market was small compared with, say, China’s, but it is centuries old and staggeringly obvious.

“Collectors and dealers share photographs of their ivories on Flickr and Facebook. CITES, as administrator of the 1989 global ivory ban, is the world’s official organization standing between the slaughter of the 1980s—in which Africa is said to have lost half its elephants, more than 600,000 in just those 10 years—and the extermination of the elephant. If CITES has overlooked the Philippines’ ivory trade, what else has it missed?” Christy said.

Read Next
As some states suppress voter rights, California increases participation online
EDITORS' PICK
Eleazar: PNP open to ICC probe but PH judicial process is working
P258M shabu seized, Chinese national arrested in Manila drug bust
Gilas out to prove Korea win not a fluke; Tab fires back at ‘lucky shot’ remark
SANTIS Delicatessen: The road to survival is sweet and savory
Man wounded as raid on illegal cockfight in Isabela leads to shootout
Piolo Pascual: The Ultimate Heartthrob continues to level up
MOST READ
Palace: Face shields no longer needed to be worn outdoors
LOOK: ‘Low vaccination’ turnout in 4 Manila sites after no walk-in policy
Lacson or Pacquiao a possible presidential candidate for NPC – Sotto
‘Pinadudumi ang politika:’ Sotto wants FB to shut down ‘troll farms’ until after 2022 polls
Don't miss out on the latest news and information.