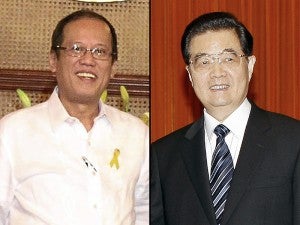 Senator Panfilo Lacson, chairman of the chamber’s defense committee, is glad that Mr. Aquino is meeting Hu Jintao for one-on-one talks. Bilateral talks are better, he said Thursday, because the participation of outsiders could muddle up the discussions.

Senator Loren Legarda, chairperson of the foreign relations committee, is also pleased to learn about the planned meeting between the President and Hu. She said yesterday that she saw the meeting as “a way of rebuilding mutual respect and confidence” between the Philippines and China.

But Senator Gregorio Honasan warned that the Philippines could be “playing into Chinese hands” by engaging Beijing in bilateral talks.

“If we are going to engage [China] bilaterally, we’d be no match,” Honasan said. “We have absolutely no leverage,” he added, referring to China’s military and economic superiority.

Honasan said the presence of other Asia-Pacific Economic Cooperation (Apec) heads of state during Mr. Aquino’s meeting with Hu would be better when the two leaders discuss the West Philippine Sea dispute.

But Lacson, who had been suggesting bilateral talks between the Philippines and China for some time since relations between the two countries went sour in April over Panatag, does not agree.

“[If] we engage in multilateral [talks] and involve other countries, there would be more interests involved and things could go awry,” Lacson said.

“Limiting the discussion to a bilateral arrangement means only the interests of China and the Philippines would be the focus,” he said. “There are more chances of success in reaping economic benefits if this is the case.”

Lacson suggested that the two countries set aside the issues of sovereignty and territorial integrity and concentrate instead on possible joint exploration of the disputed areas.

“We don’t have capital. In the long run, the Philippines would still look to a country like China to partner with when it comes to exploration efforts,” Lacson said.

“Anyway, China has always indicated it prefers bilateral talks. Besides, we have enough minds on President Aquino’s  economic team to determine if we are being shortchanged,” he said.

China, Lacson added, is aware of potential deposits of energy beneath the islands in the West Philippine Sea.  Cathy Yamsuan and Norman Bordadora