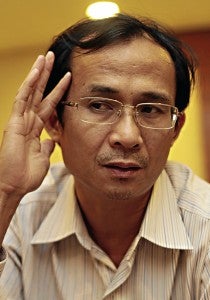 When he introduced his novel rice production method to Cambodian farmers more than a decade ago, Yang Saing Koma had to battle  skeptics who laughed at his idea. How could less irrigation and shallower planting result in higher yield?

But Koma, founder of the Cambodian Center for Study and Development in Agriculture (Cedac), only had to tap one brave farmer to get his program going.

Today, his System of Rice Intensification (SRI) is an official rice production method endorsed by the Cambodian government, credited for doubling the country’s total rice output in the last decade.

And while other Asian nations, the Philippines included, still depend on rice imports, the country of almost 15 million is looking to expand its market internationally as grains constantly grow by Koma’s design.

“For the first time, no farmer wanted to do it. It was very strange for them. But you just select one who has the courage,” Koma said laughing, recalling how he started his program.

“I just wanted to do something good for the country.  I feel that I have done something, it’s very important. Of course, there are still many things to do.  But I am very happy with what we’ve done so far.  I think we’re very proud,” he added.

Koma, an agronomist educated in the prestigious University of Leipzig in Germany, is among this year’s recipients of the prestigious Ramon Magsaysay Award, recognized for his unshakable will to push for a method that at first got laughs and criticism from traditional farmers.

The 46-year-old son of a teacher-farmer was selected as one of this year’s Ramon Magsaysay laureates, chosen for his “creative fusion of practical science and collective will that has inspired and enabled vast numbers of farmers in Cambodia to become empowered and productive contributors to their country’s economic growth.”

It’s an unexpected accolade for the soft-spoken Koma, who said his work in the last 15 years had been dedicated to empowering Cambodian farmers through an unfamiliar yet more effective method to grow rice.

The rice production method also won for Koma in 2005 an award from SEED, a United Nations-led global initiative that recognizes outstanding sustainable entrepreneurship practices around the world.

The SRI method is quite simple in principle but great in intent: “producing more with less.”

Traditional rice farming, Koma said, involved planting several seedlings deep in the ground “very close to each other” and filling the hole with a lot of water. The plots are fed with fertilizer to promote growth.

But Koma’s method, which he improved from a technique first practiced in the island country of Madagascar, follows an almost opposite procedure.

“You go for planting only one seedling very shallow, bigger spacing, less water, more compost.  The result, you get a very high yield,” he said.

It shifts the farmer’s “typical mind-set,” the agronomist said. “Before, a farmer [thought] you need a lot of water …  Actually, the rice grain is an aquatic plant. It just needs water, but actually, less water is better.”

“At first, a lot of farmers were laughing, a lot of them critical, because it was different from what they had seen for years. But they saw it was good, then it spread, they realized, Oooh … So you change their mind-set completely,” Koma said.

“First, I discussed the idea, the principle of why too much water is a problem, why less water is better, why one seedling is better.  The farmers, they understood, but they never tried it. But with the program, one said, ‘OK, I’ll try it.’ From the first farmer you get more and more farmers interested,” he said.

Several organizations have spun off Cedac’s success.  In 2003, the organization established the Farmer and Nature Net, a cooperative-type network of farmers’ associations and individual members that aims to promote sustainable agriculture and encourage women to get involved in farming.

The organization currently has $8 million in savings.

His gains in the last decade mark a journey that Koma set out to do soon after the fall in 1979 of the violent Khmer Rouge, a regime that uprooted his family from rural Takeo province and forced them to move to Phnom Penh.

He said he simply wanted to see his country grow, and he saw the opportunity in land.

“I saw that my country is poor and I [was looking at] how to build my country.  I felt it was better to start with agriculture,” Koma said.

Koma aims to spread SRI to all of Cambodia’s farmers, who make up roughly 66 percent of the country’s total population.

He has also traveled around Southeast Asia in the hopes of promoting the rice production method, from Thailand and Laos to Vietnam and Burma (Myanmar).