US ready to arm Philippines 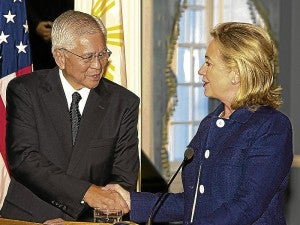 US SECRETARY of State Hillary Clinton assures Foreign Secretary Albert del Rosario that America is committed to the defense of the Philippines during a media briefing following their private bilateral meeting on Thursday in Washington, DC. AFP

WASHINGTON—The United States said Thursday it was ready to provide hardware to modernize the Philippine military, and the Philippines vowed to “stand up to aggressive action” amid rising tension at sea with China.

“We are determined and committed to supporting the defense of the Philippines,” US Secretary of State Hillary Rodham Clinton said when asked about the hardware wish list from the Philippines.

She said the United States was committed to providing the Philippines affordable military equipment to defend itself.

In a joint news conference with Philippine Foreign Secretary Albert del Rosario, Clinton also said Washington would honor its 1951 Mutual Defense Treaty with Manila that calls on each country to help defend the other against an external attack in their territories or in “the Pacific area.”

Del Rosario, with Clinton at his side, said the Philippines hoped to lease equipment to upgrade its aged fleet and called for the allies to revamp their relationship in light of the friction with China.

Tensions in the Spratly Islands have escalated in recent weeks, with the Philippines and Vietnam alarmed at what they say are increasingly aggressive actions by China in the disputed waters.

Several Southeast Asian nations have been seeking closer relationships with the United States, which since last year has called loudly for freedom of navigation in the strategic and resource-rich sea.

Clinton said the two nations were working “to determine what are the additional assets that the Philippines needs and how we can best provide those.”

“We are concerned that recent incidents in the South China Sea could undermine peace and stability,” Clinton told reporters, urging “all sides to exercise self-restraint.”

Del Rosario said the Philippines was a small country but was “prepared to do what is necessary to stand up to any aggressive action in our backyard.”

The Philippines has announced the deployment in disputed waters of its Navy flagship, the Rajah Humabon. One of the world’s oldest warships, the Rajah Humabon was a former US Navy frigate that served during World War II.

Ahead of his talks with Clinton, Del Rosario said the Philippines was asking the United States for “an operational lease so that we can look at fairly new equipment and be able to get our hands on that quickly.”

“We need to have the resources to be able to stand and defend ourselves and to the extent that we can do that, we become a stronger ally for you,” Del Rosario said at the Center for Strategic and International Studies.

‘What is ours is ours’

The United States has been providing military aid to the Philippines primarily to fight Islamic militants in the wake of the Sept. 11, 2001 attacks.

Del Rosario said the al-Qaeda-linked Abu Sayyaf had largely been defeated, estimating that only around 200 guerrillas remained.

“The Philippines’ relative success in counterinsurgency coupled with pressures in the regional environment compel a reorientation of focus and resources,” he said.

Del Rosario stressed the need for peace in the Western Philippine Sea to allow for the economic development of the area.

He added: “There is a need to segregate the non-disputed areas from the disputed areas. What is ours is ours, and what is disputed can be shared.”

Del Rosario said he also discussed with Clinton his country’s proposal for “a rules-based regime in accordance with the UN Convention on the Law of the Sea.”

China has said it will not resort to the use of force but also warned the United States to stay out of territorial spats. It says the disputes should be resolved through bilateral negotiations.

“I believe some countries now are playing with fire. And I hope the US won’t be burned by this fire,” China’s Vice Foreign Minister Cui Tiankai said.

Clinton would not comment specifically on whether the United States would provide military assistance in the event of an attack on Philippine forces by China near the disputed Spratly islands.

“I don’t want to discuss hypothetical events but I want to underscore our commitment to the defense of the Philippines,” Clinton said.

The Philippines says China has made nine intrusions in Manila-claimed waters since Feb. 25 and that these intrusions are becoming “more aggressive and more frequent.” Vietnam has also traded diplomatic barbs with China over two recent incidents.

The remote islands are also claimed by Brunei, Malaysia and Taiwan.

“We are troubled by recent incidents in the South China Sea that have increased tension and raised concerns about peace and security in the region,” Clinton said.

She said ultimately the territorial disputes had to be resolved by the claimants, but the US was willing to support a collaborative, diplomatic process by the Association of Southeast Asian Nations (Asean), which has attempted to frame a code of conduct with China.

She clarified that “we don’t, as the US, take a position on competing sovereignty claims over land features.”

Clinton noted that this year the US and the Philippines were celebrating the 60th anniversary of their mutual defense pact.

“As we reflect on the 60th anniversary of this defense relationship, we are looking forward as to how we will chart a new vision for this critical alliance,” she said.

Clinton disclosed that Washington was talking with Manila about “what their needs are because it is up to them to decide how to deploy forces and what their biggest priorities are.”

“But we certainly wish to do what we can to support the Philippines in their desire for external support for maritime defense and the other issues that … (Del Rosario) is discussing in other meetings, as well,” she said.

Seeking to counter China’s rise and rapid military build-up, the US has stepped up its engagement with Southeast Asian nations in the past two years. It is scheduled to hold naval training exercises with the Philippines starting June 28.

The Philippines, whose poorly equipped forces are no match for China’s powerful military, has so far resorted to diplomatic protests against China’s alleged intrusions. Del Rosario said China’s responses to its protests had been “unacceptable” and he was concerned about the direction events could be heading.

In 1988, clashes over the Spratlys involving China and Vietnam killed more than 70 Vietnamese sailors.

Early this week, Del Rosario met with Republican Senator John McCain and they agreed “a multilateral approach” was vital in resolving differences over the Spratlys.

McCain has urged Washington to help the Asean states to deploy an early warning system in the contested waters.

In Manila, presidential spokesperson Edwin Lacierda on Friday said “the reiteration of our treaty partnership with the United States … is timely.” Reports from AFP, AP, Jerry E. Esplanada and Norman Bordadora