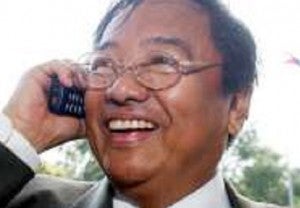 Heherson Alvarez, a member of a group called Movement for a Free Philippines, recounted how they were tailed in the United States and their activities monitored by the FBI. INQUIRER FILE PHOTO

September 1979. Somewhere in the desert of Arizona, a group of Filipino freedom fighters had just finished their secret bomb-and-weapons training, courtesy of an American-Vietnam war veteran who shared their hatred of dictators.

Tired and hungry, they drove to a nearby restaurant to eat and one of them, Raul Daza, a practicing lawyer in San Francisco, California, made the mistake of using his credit card to pay for the bill. That gave them away to the Federal Bureau of Investigation (FBI).

Heherson Alvarez, a member of a group called Movement for a Free Philippines, recounted how they were tailed in the United States and their activities monitored by the FBI.

“The FBI became suspicious after seeing the big bill and in a restaurant in a desert. So they were tracked down. That was why we were all investigated,” Alvarez recounted to the Philippine Daily Inquirer.

The C-4 bombs were bought in Kansas and they were trained to assemble and detonate them, as well as dig  in the Arizona desert to hide them.

Six months after the 1986 Edsa  People Power Revolution, the US  Department of Justice drafted an undated indictment to criminally charge the members of the group. They included naturalized Americans Steve Psinakis and Charles Avila, and the Filipinos Alvarez (later elected senator), Daza and Bonifacio Gillego (who both later won congressional seats).

The plan to include the three Filipinos in a court case for trying to oust the dictator Ferdinand Marcos  was vehemently blocked by the state department to avoid embarrassing the new regime of Cory Aquino, who was then enjoying  immense popularity, even in Washington.

Alvarez said The New York Times  in 1988 exposed the ambivalence of the US government in suing the three Filipinos.

Citing handwritten notes on a 1986 meeting among federal prosecutors, the Times said the “state department officials were concerned that the new Aquino government would be embarrassed if its allies in Washington pressed charges against the officials.”

Pursued by the Times for comment, the federal prosecutors denied that foreign policy concerns influenced their decision not to prosecute the Filipinos.

According to Alvarez, the allegations against them were all true, but they never admitted these because they were committed during troubled times.

“It was really a debate between the state department and the Department of Justice. The DOJ ended up suing Steve Psinakis, an American, because the Filipinos—Daza, Gillego, Avila and myself—were [already holding] offices in the revolutionary Cory government,” Alvarez said.

In the end, only Psinakis and Avila were charged with conspiracy and interstate transportation of explosives in 1981. Psinakis, a Greek-American businessman married to a Filipina, was acquitted by a grand jury.  Avila, never arrested or arraigned, later became mayor of Tanauan.

Alvarez organized the Ninoy Aquino Movement (NAM) in the United States to galvanize the expanding protest movement in the Philippines, focusing on the martyrdom of former Sen. Benigno Aquino Jr., who was assassinated on Aug. 21, 1983, upon his return from US exile.

The assassination unified the various opposition groups abroad working against Marcos. Alvarez became a chief lobbyist of the group, being a former Constitutional Convention  delegate.

The various opposition groups also helped elevate the struggle against an oppressive regime to a higher political level, persuading American liberals like Edward Kennedy, Stephen Solarz, John Kerry and Richard Lugar to become sympathetic to their cause.

Kennedy and Solarz held congressional hearings on the NAM’s allegations about how Marcos and his wife had amassed ill-gotten property in America, in a bid to cut US military funding for his government.

“When we got all these documents, we brought these to Sen. Edward Kennedy. I told him, ‘Senator, why don’t you investigate this.’ And he said, ‘What if you’re wrong, Sonny? Then we will be sued,’” according to Alvarez.

“I retorted, ‘What if it’s American money or foreign aid or military aid?’ I was targeting military aid because the definition is tied to  violations of human rights [and] irregularities.  We thought that was the vulnerable point of Marcos and we had a civil war, the Muslim secessionists. So if that is cut, that is really an Achilles’ heel,” Alvarez said.

Alvarez said the NAM provided US legislators with information on the money invested in New York real estate by the Marcoses. It also  documented the acquisition by the regime of the Lindenmere beachfront estate, the fabulous Crown Building of the Shah of Iran, four apartments in the exclusive Olympic Tower on 5th Avenue, and sprawling homes in Cherry Hill, New Jersey and in Princeton Pike.

The properties were later sequestered by the Presidential Commission on Good Government.

Alvarez said the group had accumulated enough documents to show that Marcos had amassed millions of dollars. It tried to peddle these documents to The New York Times but the paper refused, fearing a lawsuit in case the allegations were wrong.

Alvarez then went to Peter Carey of the Mercury News, a prominent publication in California. It ran a series of articles that eventually won for it the Pulitzer Prize.

The US Congress conducted hearings and, in every hearing, would slash military aid to the Philippines by 15 to 25 percent until the cut became more than half of the total.

To complement the lobby, the freedom fighters agreed to stage selective terror bombing operations, including one at the Commission on Elections offices and at Rustan’s, where an American woman died.

It was then, Alvarez said, that the FBI decided to pursue the charges against them.

“I have long wanted to reveal this, that there was an operation  here, not meant to hurt but to move the US Congress, [to show] what we had been doing, which really destroyed the American appreciation of Marcos as a democrat and a pillar of freedom in Asia,”  Alvarez said.

“There was the use of selective violence but it was not to hurt but to do propaganda,” he added. “We tell the foreign correspondents there is an event like that and they will flash it to their papers and  it comes out in The Washington Post, in The New York Times.”

“[We wanted] to show that not all’s well in the Philippines,” he said.

Except for the American woman, no other individual was killed in the bombings but there were others who got hurt by these “super firecrackers,” Alvarez said, referring to the C-4 bombs.

All those involved denied at the time their roles in this small footnote in history because of the turbulent times and because US officials were after them, he said.

Alvarez found no remorse on his part.

“We’re freedom fighters,” he said. “We were not setting off bombs precisely to bomb and hurt people. It was designed to capture through media the policy makers  [in the US Congress].”

“Freedom was won with the efforts of foreign exiles who were consistently and systematically trying to change policy makers’ opinions.”