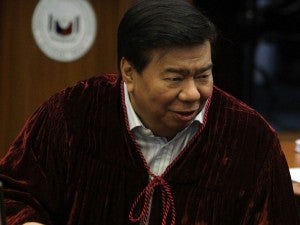 Senators have asked two government agencies to ensure that the absentee-voting rights of overseas Filipinos next year would be efficiently promoted, after noting the disappointing voter turnout at various consulates and embassies in 2010.

Quoting Foreign Secretary Albert del Rosario, Senate finance committee chairman Franklin Drilon said that of the 589,000 Filipinos who registered abroad for the 2010 elections, only 153,323 or “not even 50 percent” voted.

Drilon said the “dismal” turnout hardly justified the P205.9 million that the Commission on Elections (Comelec) was asking for to finance the absentee-voting operations in 2013.

This is apart from the Department of Foreign Affairs’ (DFA) request for a separate P100 million for its participation in the exercise.

“I lay the blame on the Comelec and the DFA for not being able to increase awareness of the importance of this law,” he said.

“When we crafted the law on absentee voting, we had a very good intention. We wanted to empower the overseas Filipinos in the hope that they could influence the elections by electing qualified leaders,” Drilon recalled.

Sen. Edgardo Angara seconded the observation, noting that the overseas voters were exposed to different cultures and perspectives and could significantly influence the manner and outcome of national elections in the Philippines.

The DFA assured the senators it planned to add more than 200,000 registered overseas Filipino voters to the current list to reach its 800,000 target.

Of the P205.98 million the Comelec asked for for overseas voting next year, Drilon questioned the inclusion of P21-million honoraria for foreign service officers (FSOs) who would supervise the exercise abroad.

Drilon said he had issues about the “validity and reasonableness” of the P21-million honoraria “that would only produce the votes of 200,000” overseas Filipinos should the two agencies again fail to convince more people to participate in next year’s elections.

The senator said the honoraria might only be used for junkets by Comelec officials supposedly assigned to assist in the absentee voting.

“These are being used as funds for junkets. Can you not do your information campaign other than through actual travel? I am raising this issue because you might think that we may not know this,” he said.

“You cannot undertake an information campaign through trips. We must show some rationality in the allocation of expenses…rather than taking foreign travels to promote kuno absentee voting,” Drilon added.

Rather than going on overseas trips, the senator said the two agencies could do better by crafting a reliable communication plan “to increase the registration, to raise the consciousness among our overseas Filipino voters, and more importantly, to improve the voter turnout.”