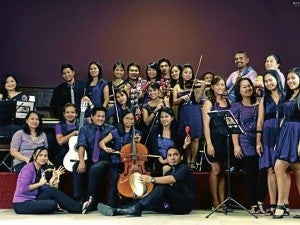 DUBAI—When homesickness creeps in, Filipinos here either hit the beaches of Jumeirah, a less cosmopolitan area in the gulf coast of this city, or those of the neighboring emirates of Sharjah and Ajman. They go in groups, packing comfort foods such as chicken adobo and grilled tilapia, and share stories to ease the loneliness.

Filipinos, many of whom said they cried incessantly during their first week away from home, consider the beaches of the gulf a haven, especially when the homesickness sets in.

Since 2004, however, a group of Filipinos have come up another way of beating loneliness: singing. They formed a choir.

The choir, although still far from being famous, has been thrilling a mixed audience of Emiratis (UAE natives) and other expatriates in high-profile locations for several years now.

They have come long way from the erstwhile Christian Voice Chorale that lifted the spirits of Mass-goers at the Saint Mary’s Catholic Church here.

Now, the singing ensemble is making it to the prime pages of Gulf News and The National—two of the leading UAE dailies—as the Dubai Vocal Ensemble (DVE).

With that, the DVE also has come to represent the world-renowned singing prowess of Filipinos in the melting pot of the Arab world.

Fermel Fuentes, 30, who works for Gulf News and serves as manager of the group while being one of its members, says singers composing the choir are of all beliefs, ages and jobs.

Singing with their hearts

The choir spends hours practicing its songs and finds joy in “working together on something [we] love and truly enjoy,” he adds.

The group performed at the souk (marketplace) of posh Madinat Jumeirah, the largest resort and hotel complex in Dubai, in time for the celebration of the Fete de la Musique (World Music Day) in Dubai on June 21.

During the performance, French tourist Leigh Forgeau, 46, a web designer, had nothing but praise for DVE while watching the choir perform “Moon River.”

“[Their music] is exhilarating. They should audition in singing competitions. They sing with their heart. They are very passionate,” said Forgeau, clasping her hands in appreciation.

The group also sang the Visayan folk-favorite “Rosas Pandan” during the event, along with the Jason Mraz hit “I’m Yours,” Slumdog Millionaire” theme song “Jai Ho” by A.R. Rahman.

From seven choir members, the group has expanded to 25. Everyone is free to audition.

Every 6 a.m on Fridays, the choir still sings at the Saint Mary’s Catholic Church while on weekends and when their work schedules allow, they rehearse alternately on each of the members’ flats, sometimes at the expense of neighbors who would knock to complain of the noise.

“The fulfillment comes when we see the audience enjoying our music,” says Fuentes.

The group performs for free but accepts donations. They can’t work professionally as singers in the UAE because they would need a license to do that, and getting a license is expensive.

The musicality of their performance is assured by Joy Santos, 34, a music teacher here who serves as their conductor.

Event organizers come to know about the choir and invite them because of favorable word of mouth after each of the group’s well-received performances.

To keep the group surviving, Santos said every member contributes 20 dirhams or around P200 per month.

She says, however, that all their efforts are worthwhile because they are able to put the Philippines in a positive light. At the same time, she says they are able to make productive use of their free time and cope with their homesickness.

“[Doing it] removes the anxiety [of staying here]. Instead of going out and spending on parties and gimmicks, we just rehearse inside the church. It eases the loneliness and longing for home,” she adds.

Next year, they are planning to tour Barcelona and join competitions in Spain. And yes, they need the support of Filipinos back home.