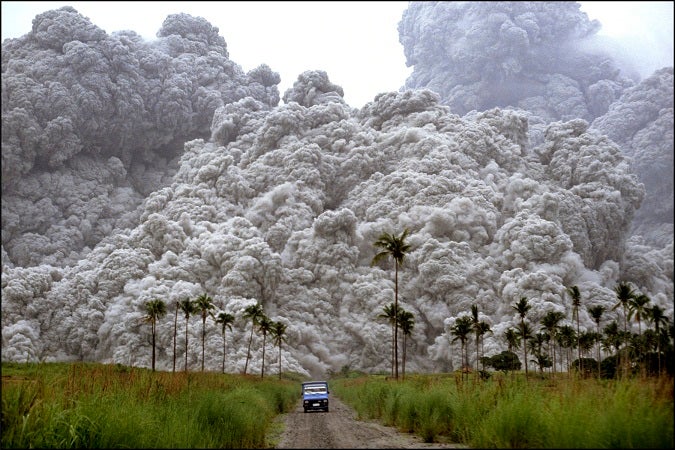 The Mount Pinatubo Photo Exhibit marks the 21st anniversary of the second largest volcanic eruption of the 20th century. It is a compilation of the works of Filipino photojournalists who braved and survived the deadly eruption that saw daylight turn into night, villages swallowed by swiftly flowing lahar, killed 800 lives, destroyed half a billion dollars worth of property, displaced tribal communities and left thousands homeless.

The dramatic photographs on display hope to remind people of the unforgettable “man against nature” episode in the Philippines’ history that tested man’s fortitude.

The photo exhibit includes before and after shots of the eruption, and images of the present-day communities, which have recovered from the devastation of that fateful day in 1991 and have moved on to rebuild their lives.

Highlights of the exhibit are award-winning photographs of Filipino photojournalists Albert Garcia and Heraldo Cabrido. Garcia, photo editor of Manila Bulletin, won the grand prize in the prestigious World Press Photo Contest, a first for a Filipino photojournalist, for his compelling shots of Mt. Pinatubo’s fury. It was also chosen as one of Time Magazine’s “Greatest Images of the 20th Century.”  National Geographic Magazine included it as one of “Best 100 Pictures of the 20th century”. To give a better perspective on the impact of Garcia’s spectacular picture, the 20th Century included two world wars, the rise and fall of many great nations of today, discoveries, inventions and scientific explorations.

Also included in the exhibit are photographs of eleven photojournalists who have survived in the death defying rush from pyroclastic flow during the initial major eruption of Mt. Pinatubo on June 15, 1991.­­­­