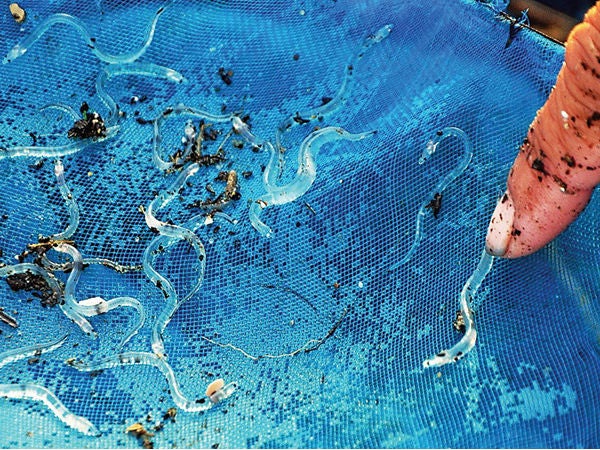 NO HK TRIP Two million elvers (young eels) like those in this photo have been confiscated at Ninoy Aquino International Airport. Contained in two plastic bags, the baby eels were supposed to be shipped to Hong Kong despite a ban on their export due to their declining number. The elvers are smuggled out of the country to be grown as adults and cooked into a favorite dish that supposedly provides added stamina for men. MELVIN GASCON / INQUIRER NORTHERN LUZON

BAYOMBONG, Nueva Vizcaya—Fishermen in Aparri, Cagayan, have sought the lifting of a government directive banning the catching of young eels (Anguilla marmorata) from the Babuyan Channel, saying this has deprived them of their only source of livelihood.

At least 1,000 fishermen signed a petition calling on the Bureau of Fisheries and Aquatic Resources (BFAR) to impose a selective ban instead.

“The gathering of elvers (young eels) … is a significant contributor of our livelihood, and the trade and economic securities of our coastal towns,” the petition read.

Since the ban was imposed early this year, many of the fishermen’s children had stopped going to school because of their limited income, said former Aparri Councilor Victor Suguitan, who spoke for the fishermen.

The gathering of elvers, locally known as “dalara,” has created a fishing frenzy among residents of coastal communities in Cagayan following a spike in demand for eel in the Asian market, particularly in South Korea and Japan.

Elvers are grown to adulthood, and  adult eels  are popular in foreign countries as an aphrodisiac.

Schools of the translucent fry, each about a week old and 5 centimeters long, are caught in the mouths of rivers in Cagayan that flow out to the Babuyan Channel. From their habitats in upland rivers, egg-laying eels swim downstream to the sea to spawn, the BFAR said.

“But since they are excessively caught on the seashores, no elvers will go back to their original habitats to grow as adults. What worries us is that at the rate these are being caught, it will just be a matter of time before they become extinct,” said Jovita Ayson, BFAR director in Cagayan Valley.

The newly found trade has been attracting Cagayan folk from all ages, who troop to the seashore from dusk to dawn, tossing their fishing nets, called “tanggar,” against the waves.

The BFAR, however, has not imposed a ban on the gathering of elvers but only a directive that regulates the export of the freshwater fish, Ayson said.

Fisheries Administrative Order No. 242, which was issued by Agriculture Secretary Proceso Alcala on April 10, prohibits the export of elvers that are less than 15 cm long, Ayson said.

The export ban tends to control the rate by which young eels are being caught and prevents their extinction, said Evelyn Ame, regional chief of the BFAR’s resource management division.

“Not so long ago, this was the same fishing frenzy that led to the extinction of Anguilla japonica,” she said, referring to one of the then four remaining eel species found in Cagayan.

The BFAR hopes to develop technology that will help fishermen grow elvers.

“We are encouraging foreign companies that buy elvers to come to the Philippines instead and put up facilities here,” Ayson said.