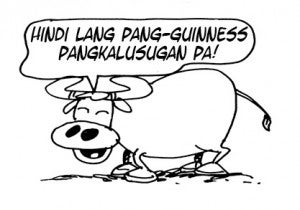 “You are now officially amazing!”

The feat was also a win for the Philippines, organizers said.

At the closing of the medical-dental mission in Parola, Tondo, on Saturday night, Vara announced that she and the Guinness partner auditor for the event had recorded 4,128 people who benefited from the dental health check, beating the record of 3,377 previously held by India.

Guinness also announced a record 8,026 BP readings and 5,217 BGL tests, which were conducted in cooperation with the Felix Y. Manalo Foundation.

The Kuwait Heart Foundation previously held the record of 7,203 BP readings taken in eight hours. The foundation achieved the record on Oct. 28, 2011.

The previous record for the most numerous BGL tests in eight hours was 3,573. It was achieved at an event organized by the Novo Nordisk Education Foundation in Bangalore, India on Nov. 13, 2011.

“This was a truly extraordinary event,” Vara said of the INC achievement, as she made the announcement.

“I have truly not seen anything like this not just as a representative of Guinness world record, but in my life. I’ve never seen an organization so dedicated to helping other people free of charge all day from 10 past 10 in the morning to 10 past nine at night,” she said.

Vara said she did not know of any other organization in the world that was able to break three records in just one event.

“I would like to say that I was extremely pleased (and) moved, and I’m just completely humbled by the fact that you gave your services today. The standards were incredibly high. All of you ensured that you were following the Guinness world record guidelines which I was adamant you had to. So, thank you for listening to me. You are now, officially amazing!” Vara said.

She raised the “Guinness world record” seal amid shouts of joy from volunteers, organizers and beneficiaries who stayed on for the announcement.

Aside from providing medical and dental consultations, the lingap sa mamamayan distributed medicines to thousands of residents in Tondo, particularly those from Parola, Baseco and Isla Puting Bato.

Volunteers from the INC and the Felix Y. Manalo Foundation also distributed 50,000 bags of relief that contained 5 kilos of rice each, noodles and canned goods.

In a statement, INC executive minister Eduardo V. Manalo said the INC members were doing this in accordance with the biblical teachings to love and care for others, especially those who have less in life.

The aid for humanity in Tondo was also done to commemorate the INC’s 98th anniversary this month.

Glicerio B. Santos Jr., INC general auditor, said the aid for humanity in Tondo was the biggest so far.

Some 200 doctors, 600 paramedics, and hundreds of nurses and other volunteers, led by Glicerio Santos III, helped to make the daylong outreach a success.

Organizers said close to 100,000 people, most of them living in the slums of Tondo, flocked to the event.

The aid for humanity also provided X-ray, ultrasound, 2D-echo and laboratory services, and set up 10 hospital beds where minor surgeries could be performed. Aside from medicines, several wheelchairs were also given to needy folks.

Vara said this was an “incredible feat” because the thousands who had flocked to the area, had been given proper attention by the doctors, nurses and paramedics, complete with the necessary medication to address their ailments.

“And it wasn’t just about achieving Guinness world records,” she said, noting that there was treatment and assessment of what was wrong with the people who came to the vast makeshift structure that emulated a hospital setting at the heart of Tondo’s slums.

The distribution of relief  started at around 8 a.m. Medical and dental services opened at 10:10 a.m. and were conducted for eight hours straight. Counters from SGV, Guinness’ partner in the event, ensured strict compliance with Guinness guidelines.

At 6:10 p.m., the counting was officially stopped, although the checkup continued for hundreds still in line.