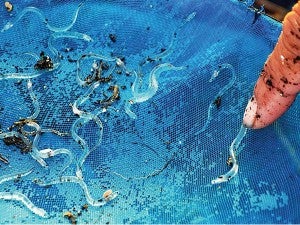 NO HK TRIP Two million elvers (young eels) like those in this photo have been confiscated at Ninoy Aquino International Airport. Contained in two plastic bags, the baby eels were supposed to be shipped to Hong Kong despite a ban on their export due to their declining number. The elvers are smuggled out of the country to be grown as adults and cooked into a favorite dish that supposedly provides added stamina for men. MELVIN GASCON / INQUIRER NORTHERN LUZON

It was a trip that would have brought ill effects to the long-term survival of an eel species found in the Philippines.

Thanks to quarantine officials, some 2 million baby eels hidden in freight at  Ninoy Aquino International Airport (Naia) were discovered on Sunday, preventing their trip to Hong Kong.

The eels were stored in plastic bags filled with water and hidden in 46 boxes, said Ben Curativo, head of the  fisheries quarantine division at Naia.

The Philippines in May banned the export of elvers, or young eels, after studies showed their numbers were slowly being depleted.

“It was to board an airplane bound for Hong Kong, and we are now tracking down the person behind the shipment,” Curativo said.

“We suspect the eel fry would be grown there and once they reach maturity could be served in restaurants. It is a delicacy.”

After being caught around the Philippines, eels are usually shipped to Manila for export to other Asian countries, where they are considered an exotic cuisine with aphrodisiac qualities.

The Bureau of Fisheries and Aquatic Resources (BFAR) is tracking down the exporter and the importer of the illegal shipment, according to the MIAA.

The baby eels will be brought shortly to the BFAR hatchery in Tanay, Rizal, the MIAA said. Reports from AFP and Jerry Esplanada