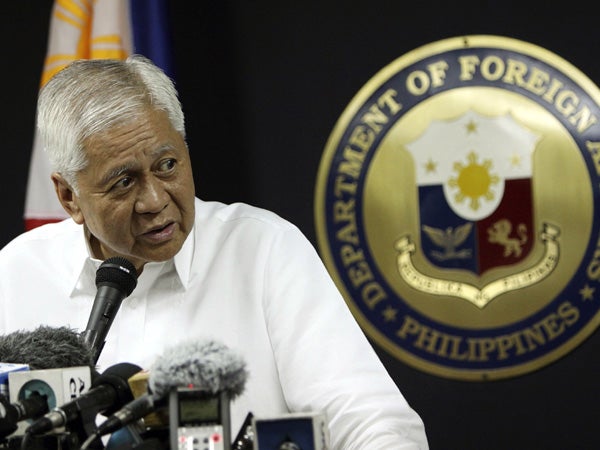 The Philippines and Japan have agreed to enhance their bilateral cooperation on “shared regional strategic concerns,” including maritime security, the Department of Foreign Affairs (DFA) said Sunday.

“The two ministers engaged in comprehensive discussions reviewing key aspects of relations and affirmed their respective governments’ commitments to advancing the multifaceted bilateral relations on the two countries’ shared values and long history of cooperation,” the DFA said in a statement.

Their discussion was focused on the refinement of political dialogue, economic cooperation, official development assistance and business-to-business and people-to-people ties, as well as on the furtherance of bilateral cooperation on shared regional strategic concerns, including maritime safety and disaster risk reduction, the DFA added.

The foreign office, however, did not provide details about the two officials’ dialogue on maritime security-related matters.

Del Rosario earlier told the Philippine Daily Inquirer that aside from the United States, three other countries—Japan, South Korea and Australia—were helping the Philippines establish a minimum credible defense posture to complement its diplomatic capacity in dealing with its territorial disputes with China in the West Philippine Sea (South China Sea).

He disclosed that Tokyo was likely to provide the Philippine Coast Guard with 12 patrol boats.

Minister Shinsuke Shimizu, head of the embassy’s chancery, told the Inquirer that Tokyo would continue to help the Coast Guard deal with its maritime safety and law enforcement concerns.

Shimizu clarified, however, that “it is of different nature from establishing the minimum credible defense capabilities” of the Philippines, “nor is it aimed at addressing a specific regional situation,” referring to the dispute between Manila and Beijing regarding Panatag (Scarborough) Shoal.

The diplomat noted that “since 1990, Japan has been helping the Coast Guard in its capacity-building program.”

Before Del Rosario’s three-day trip to Japan, Shimizu said the DFA head would discuss with Gemba “ways to continue Japanese government cooperation with the Coast Guard.”

“But it is cooperation for the purpose of dealing with various maritime safety and law enforcement issues, such as piracy and search-and-rescue,” Shimizu explained.