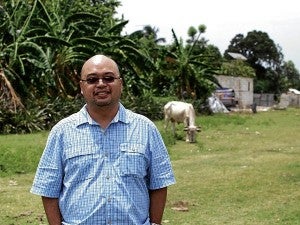 Upon my return to Haiti early this year, my mind flashed back to the last time I was here in 2011.

At that time, a year after the earthquake, piles of rubble and makeshift tents still dotted parts of the city.  And I could still feel the chill—the aftermath of one of the most devastating quake in the world.

If you remember, it was in January 2010 when a magnitude 7 earthquake hit Haiti. Hundreds of thousands of people died. Over a million were left homeless.

Standing here again two years after the quake, I can say that the capital of Port-au-Prince has changed only a little bit. Most of the rubble and the big tented camps near the airport have been cleared. Nevertheless, the city is still in the early stages of clearing and reconstruction.

There are a few remaining tented camps, where people affected by the earthquake live in squalor. Basic sanitation remains very poor. It is no wonder that diseases like cholera spread like wildfire here.

Reminds me of home

Leogane, the epicenter of the 2010 earthquake, is where I am assigned as part of the Médecins Sans Frontières (MSF) team here.  It is just 40 kilometers west of Port-au-Prince. But what would normally be a 30-minute drive, takes two and a half hours because of poor roads and bad traffic.

Eighty percent of the homes and infrastructure here were destroyed. MSF, also known as Doctors Without Borders, started providing emergency medical assistance in Leogane only a few days after the disaster.  MSF quickly set up temporary health facilities in tents and started treating the wounded. Eventually it built a 160-bed container hospital to respond to medical emergencies.

Last year, there was still a lot of rubble and destroyed houses around town. I was happy to see that this has been mostly cleared. In fact, a few new houses, a couple of schools and a church have been built in less than a year.

The people of Leogane lead very simple lives. Schoolchildren going to and from school fill the streets almost everyday. People move around by foot, bicycle or motorcycle taxi.

Severe storms pass through  here every year.  But coming from the Philippines, this is nothing new to me. The climate is tropical, mostly warm and humid, just like at home.

Despite overwhelming poverty, I find the Haitians a very soulful and happy people. Parang tayong mga Pinoy din! Kahit na anong hirap sa buhay kayang harapin basta magkasama ang pamilya. Masaya (They are also like us Filipinos. Whatever life’s hardships, they can be faced as long as the family sticks together). I enjoy it here. 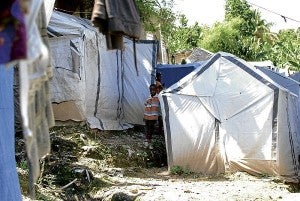 Everywhere there is still music, laughter and banter, and yes, dancing.

Haiti is not a war zone but the patients I see here have conditions as severe and as serious as those I saw in Afghanistan or Pakistan.

The people of Leogane have no other facility to go to if they need specialized care other than the MSF hospital. There are few private hospitals around. But many people cannot afford to pay for the level and quality of care that they get for free at the MSF facility.

Most of our patients are trauma-related cases, such as victims of  vehicular accidents, work-related injuries and abdominal emergencies (such as appendicitis or perforated typhoid ileitis).

Since I arrived, I have seen one patient die—a victim of a fall that caused severe internal bleeding.

I do major surgical operations as well as simple procedures.

During my first three weeks in Leogane, I worked seven days a week. I still get up at odd hours to respond to emergencies. I eat and sleep when I can because I never know when I will be called for the next patient in urgent need of surgical care.

One of my patients was a 10-year-old boy who fell from a mango tree. His abdomen literally burst open. I discovered other complications in his internal organs. Luckily, I managed a successful operation and he is now well on the way to recovery.

Another patient with severe complications was a 23-year-old man whose abdomen was inflamed. The final section of his small intestine had ruptured, which I suspected to be due to typhoid. He literally had no blood pressure when he arrived at the hospital. He survived a long operation and it is going to be a long road to recovery for him.

The surgical act is just one part of integral care.

MSF’s medical activities in Leogane are also directed at capacity building. We give the local staff more and more responsibilities, including decision-making responsibilities, in the hope that when MSF leaves, the hospital will continue providing quality health care to Haitians.

The junior doctor I was training last year is now chief of surgery in the hospital. There are three other local surgeons who share the work, too, whereas last year, I was the only one performing all surgeries.

Recently, they started doing their work autonomously, requiring less supervision from me. I have focused on training the surgeons under me—not only to be good as surgeons, but also to take good care of patients before and after operations.

The power of touch

I constantly tell them to talk to and touch their patients and not to act like aloof clinicians who just stand in front of patients while giving directions to nurses.

I noticed that everywhere in the world, from Congo to Pakistan, to Afghanistan, to Cambodia, and here in Haiti: patients respond to touch. Nothing conveys your empathy and care better than a simple pat on the back, a handshake or a gentle touch on the head to check for a fever.

It makes patients happy and reassures them that their worries and problems are no longer their burden alone, that they are in your care. I believe it helps them recover faster.

The author is an experienced war and trauma surgeon from the Philippines. He is currently working for MSF in Haiti.