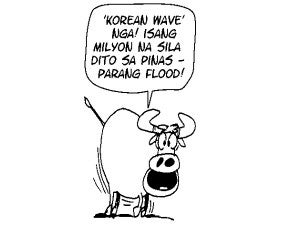 Just as Filipinos are fascinated with the Korean wave, Koreans are finding diverse meanings to fun in the Philippines.

The people from the land of K-pop and Koreanovelas see the Philippine tourism campaign as parallel to that of their home country, said a top official of the South Korean Embassy.

According to Hwang, the top attractions for the visitors from Korea are the country’s beautiful beaches and the people.

“Beaches in Batangas are great,” Hwang, who is also director of the Korean Cultural Center, told the Inquirer. “The people here are very friendly and no matter who we approach, they are always willing to talk and communicate in ways they know and in ways that would be understood. Their ability to speak English is one of the strongest points of Filipinos.”

He cited Cebu and Boracay as among the popular honeymoon destinations for Koreans.

He described the Department of Tourism (DOT) drive as “positive,” stressing that “it highlights the fun-loving nature of Filipinos.”

The embassy official has expressed optimism that the number of Korean tourists to the country will break the one million-mark this year, given the aggressive campaign the DOT has recently launched.

Last year, South Koreans topped the list of foreign tourists to the Philippines, followed by visitors from Japan and the United States, according to the DOT.

In January, Koreans accounted for 102,166, or 24.9 percent of the 411,064 foreign visitors in the country, according to embassy records. During the past five years, some 1.44 million Koreans visited the Philippines.

Hwang said it would be a good idea to further intensify the Philippine government’s tourism campaign in Korea.

“Koreans will continue to fly to the Philippines, given that flights between the two countries average 23 per day. Also, the Korean community in the Philippines has settled in quite nicely and the Korean towns around give Korean tourists a sense of belonging despite being in a foreign country,” he said.

However, he said their host government should do something about what he called a “common concern” among Korean tourists—the “harassment many Korean visitors suffer in the hands of immigration officials.”

“The embassy has expressed concern over the Bureau of Immigration (BI) watchlist on certain Korean individuals. Since only the names of blacklisted individuals are indicated in the BI order, Koreans with the same names as the blacklisted ones experience unexpected trouble at Philippine airports. That is why we have asked that the expansion of the information in the same blacklist or watchlist should include not just the names but also the birthdates of the concerned individuals,” he said.

Read Next
Healing wounds in postquake Haiti
EDITORS' PICK
DOH: Too early to say COVID-19 cases are declining
The best of bayside and city living at SMDC’s Sail Residences
COVID-19 cases in City of Manila are decreasing, says OCTA
Gov’t rolls out COVID-19 vaccination in select pharmacies on Jan. 20 to 21
Acer starts the year off strong with the Aspire Vero National Geographic Edition
Over 3 Million worth of prizes to be won at Smart Padala’s SENDali Manalo Promo!
MOST READ
Comelec junks petition to scrap Bongbong Marcos COC
In Batanes, octogenarian dies of COVID-19
Marcos Jr. visits Cebu, stands as ‘ninong’ to mayor’s son
When to get boosters after positive COVID test
Don't miss out on the latest news and information.