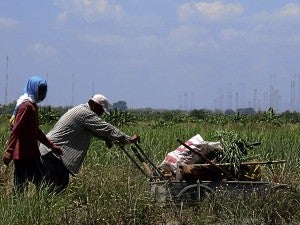 MANILA, Philippines—Filipino farmers use the equivalent in power of a small electric fan per hectare of farmland.

That’s because the Philippines has one of the lowest rates of mechanical equipment use in Southeast Asia—at half a horsepower (.5 hp) per hectare (hp/ha), according to newly installed Philippine Center for Postharvest Development and Mechanization (PhilMech) Executive Director Rex Bingabing.

“In layman’s terms, that’s equivalent to one small electric fan,” said Bingabing in an interview on Thursday.

Other agricultural countries in the region like Vietnam and Thailand–both of which export rice–have a much higher mechanization rate at .7 hp/ha. Fully industrialized Japan utilizes 7 hp/ha, while developed South Korea recorded 4 hp/ha.

This translates to more efficient work, higher productivity and greater yield for their farms, Bingabing pointed out.

Bingabing said that 16 percent of the total rice output was lost due to inefficient farming methods and equipment.

“If we can reduce that to single digits, we won’t have to import rice,” he said. “If we do that, we can get a net gain of 6 percent. That would be an additional yield without changing much in production,” Bingabing said.

President Benigno Aquino wants the Philippines to be self-sufficient in rice by 2013. Agriculture Secretary Proceso Alcala said the government will not import rice after that year. This year, the rice importation is only 500,000 MT.

Bingabing said many Filipino farmers did not have the money to buy hand tractors and other small farm equipment. The Department of Agriculture, he said, was addressing this lack with a credit facility for the farmers.

The farmers are also reluctant to mechanize because they fear losing work. “They feel that they will be displaced. But if they look at the bigger picture, they will realize that if they can do in half a day what they used do in a full day, they can do other jobs,” Bingabing said.

Bingabing said Philmech, a DA-attached agency, aims to increase the use of mechanical equipment on Filipino farms to match the rates of Thailand and Vietnam.

PhilMech, he said, will focus on developing small-scale farm machinery that will help farmers add value to their produce and avoid waste at the same time.

He observed that many farmers allowed much produce to be wasted or to rot because of excess production or because traders were not willing to pay better prices.

“I have observed that many corn farmers are left with harvests that they cannot sell and these will deteriorate if not processed into value-added products like flour. Also, tomato farmers who have excess production can process their unsold harvests into tomato paste or dried tomatoes,” Bingabing said.

As of April, PhilMech was ahead of its schedule in distributing different farm equipment to qualified farmers’ organizations. It has given out 644 hand tractors, 33 four-wheel tractors, 270 palay threshers, 14 single-pass rice mills, 326 rice drum seeders and 90 rice reapers.