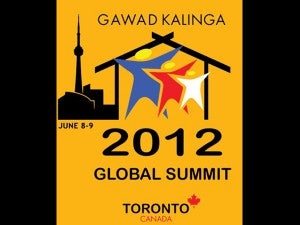 But for Gawad Kalinga (GK), a poverty alleviation and nation-building movement, both men and women build not just homes but empowered communities.

The 4th Gawad Kalinga  Summit in Toronto, which closed June 9, hit a home run after Filipino-Canadian participants expressed enthusiasm for GK’s 2013 Bayani Challenge, which targets a total of 100,000 volunteers for a nationwide build covering 30 provinces in the Philippines.

The build is as much an immersion program as it is constructing homes.

About 700 delegates from North America, Europe and Asia attended the two-day summit held at the Allstream Center in Toronto.

Speaking at the summit, GK founder Tony Meloto cited the 6.4-percent growth in the Philippine gross domestic product  in the first quarter of the year, a gain second only to China’s, something which he said “never happened before in the country’s history.” He also quoted the HSBC projection that the Philippines would have the 16th largest economy in the world by 2050.

Meloto said that based on these projections, the Philippine economy would be equal to that of Canada by 2035.

The good news was welcomed by most Filipino-Canadians as it signified renewed hope for community-building efforts in the Philippines. At 400,000,Filipino-Canadians comprise the fourth largest urban minority in Canada.

Meloto said Canada’s awareness of this economic trend was the reason why Canadian firms like Sun Life Financial and Telus International had partnered with GK for their corporate social responsibility programs. This recognition was also reflected by the presence of Canadian Ambassador to the Philippines, Christopher Thornley, at the summit.