US attack submarine docks at Subic 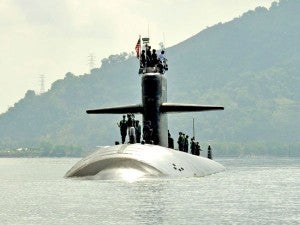 ON PORT CALL The attack submarine USS Louisville (SSN 724) enters Sepangar Bay in Malaysia in this photo taken on April 3. The submarine is now docked at the Subic Freeport. US Navy photo

The USS Louisville, a Los Angeles-class nuclear-powered attack submarine, arrived on Subic Bay Monday for a routine port call, according to the US Embassy in Manila.

In a news release, the embassy said the visit would allow the submarine to restock and give its crew of more than 130 an opportunity to rest.

According to the US Navy website, the Louisville is one of the most advanced attack submarines in the world. Its mission is to seek out and destroy enemy ships and submarines.

The 110-meter submarine was commissioned on Nov. 8, 1986, at the US naval base in New London, Connecticut.

Weighing 6,900 tons, it is armed with sophisticated MK-48 torpedoes and Tomahawk cruise missiles, among other weapons.

Based in Pearl Harbor, Hawaii, the Louisville made naval history by firing the first submarine-launched Tomahawk missile during Operation Desert Storm in Iraq in the 1990s.

Col. Omar Tonsay said the Louisville had no other mission in the Philippines except replenishment.

The submarine requested clearance to dock at Subic in May, Tonsay said. It is staying until Saturday.

He added that the Louisville’s arrival had nothing to do with the territorial dispute between China and the Philippines in the West Philippine Sea (South China Sea).

Roberto Garcia, chairman of the Subic Bay Metropolitan Authority, said businesses engaged in logistics and tourism would benefit from the Louisville’s visit.

“But under the [Visiting Forces Agreement],” he said, [the submarine will not pay port usage fees. The sub’s personnel will spend on shore in restaurants [and other establishments].”

In an earlier interview, Garcia said he would welcome American troops as long as their visits kept the terms of the Visiting Forces Agreement.

“[This means that there would be] no land-based military operations,” he said.

Last month, the Virginia-class attack submarine USS North Carolina, one of the stealthiest and most technologically advanced nuclear-powered submarines in the world, made a similar port call in Subic.

The North Carolina arrived amid a standoff between the Philippines and China at Scarborough Shoal in the West Philippine Sea.

Late last year, the nuclear-powered aircraft carrier USS Carl Vinson sailed into Manila Bay. It was the same ship that reportedly buried Osama bin Laden in the Arabian Sea after the al-Qaeda chief was killed in a raid by US commandos on his hideout in Abbottabad, Pakistan, in May 2011.

The Carl Vinson was escorted by two guided missile cruisers and a destroyer. The four warships were manned by more than 6,000 sailors. With reports from Frances Mangosing, INQUIRER.net; Dona Z. Pazzibugan, PDI; and Robert Gonzaga, Inquirer Central Luzon