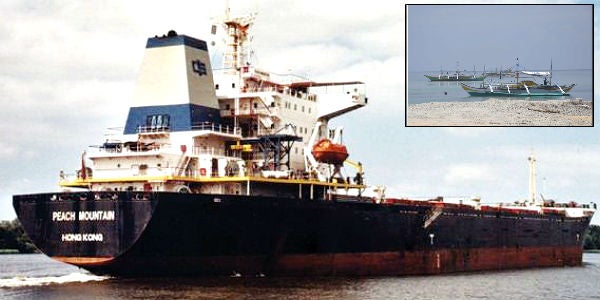 CULPRIT? The Hong Kong-registered, 195-meter MV Peach Mountain is suspected to have rammed a Philippine fishing boat on June 20 off the waters of Bolinao in Pangasinan. Survivors say their fishing boat is similar in size to the 13-meter vessel shown above. Willie Lomibao/contributor

The Philippine Coast Guard on Monday said a Hong Kong-registered commercial ship was most likely the vessel that rammed a Philippine fishing boat in the West Philippine Sea (South China Sea) on June 20, killing a Filipino fisherman and leaving four others missing.

An investigation by the Coast Guard’s Watch Center found that only one vessel sailed through the area where the accident happened in waters off Bolinao town in Pangasinan province.

“But this is just a suspect,” Tan said. The Coast Guard was still “investigating and coordinating” with its counterparts in the Hong Kong Maritime Rescue Coordinating Center and the Port State Control in Tokyo and Singapore.

Lt. Cmdr. Armand Balilo described the incident as a “hit-and-run,” saying that the ship hit the fishing boat and then left without trying to help the fishermen.

Early reports of the accident on Sunday quoted Philippine officials as saying survivors had said the vessel that struck their boat was from China.

The Chinese Embassy was displeased with news reports that the offending vessel was from China.

In a statement issued on Sunday night, Zhang Hua, the embassy spokesperson, said “such media reports remain to be verified.”

“Upon seeing the stories, the Chinese Embassy immediately checked with the relevant authorities in China and was told that until now, there have been no reports of vessel collision, accident or SOS requests (on June 20 in the waters north of Scarborough Shoal in the West Philippine Sea, or South China Sea),” he said.

“Someone reportedly said the Philippine fishing boat was rammed by a Chinese vessel,” Zhang said. “We wonder what that news story was based upon. We hope relevant persons can verify the facts with a responsible attitude before they report (the news).”

Speaking to reporters in La Trinidad, Benguet province, President Benigno Aquino on Monday said the government was not accusing any country of involvement in the accident until all evidence was in.

“Let us not say the accident was the fault of Pedro, of Juan, of Maria and anybody else while we have no evidence. We might make the situation, worse,” Mr. Aquino said. “Maybe evidence will show that the opposite is true.”

Mr. Aquino was in La Trinidad to attend the oath-taking of 300 new members of the ruling Liberal Party in the Cordillera Administrative Region.

Once the investigation showed that it was a “ramming incident” and that people were left unaided at sea, Mr. Aquino said, then the offending vessel was “in clear violation of the laws governing the seas.”

The incident would then be “actionable” and the government could bring charges in the “appropriate [forums]” for “justice for our fishermen.”

The two engines of the 13-meter, wooden fishing boat AXL John had conked out and the boat was moored to an artificial reef in choppy waters off Bolinao when it was struck by a large vessel about noon on June 20.

Of the eight fishermen aboard, four were plucked out of waters off Ilocos Sur province on Saturday. They were taken to a hospital in Vigan City.

One of the four, Christopher Carbonel, 32, of the island village of Dewey in Bolinao, died of injuries sustained in the accident.

The three others in the Vigan hospital were identified as Herman Balmores, Emedio Balmores and Marcelino Damian.

Mr. Aquino said he planned to visit the three fishermen in the hospital. He said the government would provide assistance to the survivors.

“We are conducting operations to recover” the four missing fishermen, Mr. Aquino said.

Not related to dispute

Vice Admiral Tan said the incident was an accident and not related to the dispute between China and the Philippines over Scarborough Shoal in the West Philippine Sea.

The site of the accident was 255 kilometers north of Scarborough Shoal, he said.

Tan said the disputed shoal, which the Philippines calls Panatag Shoal and Bajo de Masinloc, lay on the east side of Zambales. The June 20 accident  occurred 144 kilometers (78 nautical miles) northwest of Bolinao, Pangasinan.

Citing initial reports from the Coast Watch Center, which tracks ship movements of vessels off the archipelago’s coastline, Tan said the suspected vessel was monitored from Zambales moving northward at 8:46 a.m. on the day of the accident.  The incident occurred at 1 p.m., said Tan.

Tan said he doubted reports that the foreign vessel came from Scarborough Shoal.

“It may have come from another place. It’s within the Philippine area of responsibility but there is freedom of navigation that area so vessels can traverse in that area for as long as they don’t do anything illegal,” Tan said.

Tan said the Coast Guard had dispatched the tugboat Habagat to search for the four missing fishermen.

According to the survivors, their boat took in water due to big waves. To prevent the boat from sinking, they anchored the boat to a “payaw” (artificial reef), which the foreign vessel later accidentally hit.

Tan said the survivors also told the Coast Guard that the vessel that hit them was painted blue and maroon with markings on the stern that read “Hong Kong.”

NDRRMC Executive Director Benito Ramos on Monday said that the last message relayed by the operator of the AXL John in a phone call to the boat owner showed the boat was hit by a Chinese vessel.

Ramos said, however, that his agency had not yet confirmed the survivors’ claim.

But unlike the Coast Guard, Ramos would not say that the incident was wholly accidental.

“We hope that’s the case,” he said. “But if it was accidental, they should have rescued the eight [fishermen]. Why did they abandon them?”

Ramos said there was no low-pressure area over the West Philippine Sea on the day of the incident, though the southwest monsoon caused big waves in the area.  With reports from Jerry E. Esplanada, Christine O. Avendaño and Dona Z. Pazzibugan; Vincent Cabreza, Inquirer Northern Luzon; and AFP