Missing US medal of honor returned to heirs of Filipino soldier 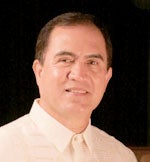 SAN FERNANDO CITY, Pampanga, Philippines -– Even as a young girl, Maria Delilah Turzar, 40, had always been fascinated by the framed, faded magazine article displayed on the wall of her grandmother’s house here.

The Philippines Free Press article, written in 1957 by Primitivo Milan, was titled, “The First Filipino Awardee of the US Congressional Medal of Honor,” and talked about Turzar’s great grandfather, Private Juan Nisperos, of the 34th Company of the Philippine Scouts.

Nisperos was the first Filipino and Asian to receive the medal, the highest United States military honor.

“I kept on reading the story about Lolo Jose and wondered where the medal was,” Turzar said.

When she was 10, she accompanied her Lola Guia (Nisperos’ daughter) to a Mass. After the Mass, her grandmother knelt down and started to cry.

“I understood that deep in her heart, there was no closure of that chapter in their life. I promised her then: ‘When I grow up, I will exert my best effort to find what is rightfully due your father and our great grandfather.’ I made the same promise to her sisters, Leonila and Conception,” she said.

Her grandmother told her that a relative, Jose Bantog, took the medal days after Nisperos died in 1922, supposedly to help Nisperos’ widow, Potenciana, claim benefits from the American government.

But since that day, the family never saw the medal.

It was five years ago when Turzar embarked on a mission to find the medal, meeting different people along the way, some of whom tried to take advantage of her search.

“There were people coming even from the United States pretending to be writers and knowing about Lolo Jose. They say they could help us approach people to get it back, for a fee of $5,000. Of course we did not have that money to give them,” she said.

But Turzar’s effort and patience bore fruit. After 90 years, Nisperos’ Medal of Honor is now with the family for safekeeping.

“After 90 years of praying and hoping, the medal of our great Lolo Jose — the first Filipino, the first Philippine scout, the first Asian and the first non-American recipient of the Medal of Honor for valor, the highest US military award — was given back to us, the rightful heirs,” Turzar said.

Ortega appealed through the media to spread information on the missing medal and sought its return to the family.

Early this month, Ortega’s friend, an antique dealer who has been running a store in a shopping mall in Metro Manila, informed him that he knew the collector who bought Nisperos’ medal at an auction of the Philippine Numismatic and Antiquarian Society in 2010.

Turzar said the collector, who asked not to be identified, learned about the family’s search and appeal from media reports this year and kept clippings of news reports about it. A meeting for the medal’s return was then set.

“We finally met the collector on June 7 and he just gave it back to us, without asking anything in return,” Turzar said.

Turzar was ecstatic when she read her great grandfather’s name engraved on the medal.

“My grandmother Guia, her sisters Leonila and Conception and even my mother Virginia never saw the medal in their lifetime. Now my promise to them had been fulfilled,” Turzar said.

The medal is under the temporary custody of the city government because it will be displayed in Tuesday’s Independence Day celebration in San Fernando City.

In General Order No. 64 issued on Nov. 25, 1912, the US War Department honored Nisperos with the medal for “most distinguished gallantry,” after he repulsed a group of Moro rebels who ambushed the 34th Company of the Philippine Scouts in Basilan on Sept. 24, 1911.

“Having been badly wounded (his left arm was broken and lacerated and he had several spear wounds in the body so he could not stand), Private Nisperos continued to fire his rifle with one hand until the enemy was repulsed, thereby aiding materially in preventing the annihilation of his party and the mutilation of their bodies,” read the citation.

During rites at the Luneta Park on Feb. 5, 1913, Nisperos received the US Congressional Medal of Honor from Brig. Gen. Franklin Bell, the commanding general of the US Army’s Philippine Division.

The US Army discharged Nisperos and gave him a pension of $55 a month. He died at age 34 in 1922 following an illness.

But the search for the medal also led to the belated giving of military honors to Nisperos, 89 years after he died.

Nisperos was buried in an ordinary grave in a public cemetery here, without military honors. The grave had no marks to identify him as a Medal of Honor recipient.

“No Philippine or American flag was spread on top of his unmarked tomb every Nov. 1,” Turzar said.

Through the social networking site, Facebook, Turzar connected with officers of war veterans’ groups as she searched for the medal.

“I added to my Facebook account Sir John D. Keller, [commander] of the American Legion China Post 1 based in Baguio City, informing him about my great grandfather. He asked about Lolo Jose and gave my number to Sir Frank Hilliard of the Veterans of Foreign Wars who told me that they have been searching for my great grandfather’s grave,” she said.

In April, Nisperos’ remains were reburied and given military honors at the Lingsat cemetery here.

Turzar said the military honors for Nisperos and the return of his medal to the family were the fulfillment of her promise to her grandparents and to her mother Virginia.

She said her mother, before her death in 2006, told her: “Keep Lolo Jose’s documents. Take good care of every piece of those documents because they are proof of your Lolo’s great legacy to our family, to our country and even to the United States.”