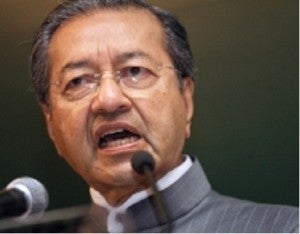 Mahathir Mohamad on Monday said his experience as prime minister of Malaysia for two decades should show that physicians, just like lawyers and economists, made good, if not better, government leaders.

“Medical doctors are methodical,” Mahathir said, noting that physicians determine the causes of an illness and prescribe the remedy. Lawyers, on the other hand, “argue too much,” he quipped.

Mahathir, who delivered a lecture at the University of Santo Tomas which conferred on him an honorary professorship, made the statement in response to a comment by UST Faculty of Civil Law Dean Nilo Divina who noted that Malaysia was able to prosper and develop into a regional leader under the leadership of a medical doctor.

The 86-year-old Malaysian statesman said that he went against prevailing economic belief during the currency turmoil in 1998 by fixing the ringgit to the dollar in defiance of the International Monetary Fund (IMF).

Against austerity measures advised by the IMF and the dominant economic philosophy, Mahathir also increased government spending. The result: Malaysia got out of the crisis ahead of other Southeast Asian countries.

“I’m not bound by economic theories,” Mahathir told the UST audience. “Sometimes you have to go against them.”

Mahathir, who arrived in Manila Sunday, carries the title “Tun”—meaning “Knight” or “Sir”—a designation he received when he was made Grand Commander of the Order of the Defender of the Realm by Malaysia after he stepped down in 2003.

He was in Manila to deliver the “UST Neo-Centennial Lecture” as part of the Dominican university’s celebration of its 401st year as Asia’s oldest university.

Father Herminio Dagohoy, O.P., the new rector magnificus  (president) of the University of Santo Tomas, extolled Mahathir  as a leader of the developing world. He said the Malaysian leader stood up against the “unfounded division by the West of the First and Third Worlds.”

Mahathir warned that the developing world was experiencing a “collapse of values” because of the liberal democracy being promoted by the West.

“Is democracy a means or an end?” Mahathir asked. “If we think that democracy is the end, then well and good. But why did we change from autocracy to democracy? Wasn’t it because autocracy failed to deliver the good life that we wanted? We believed that since it is the people who disapproved of autocracy, then if the people were to rule the country, then surely they would rule themselves well.”

While admitting that Malaysia is “not a liberal democracy,” he explained that free-wheeling democracy may result from mediocre leaders, “present company included,” taking a potshot at the ruling coalition in Malaysia, led by the  United Malays Nationalist Organization and Prime Minister Najib Tun Razak.

He said Malaysians saw democracy principally as providing an “easy way” to change governments—no revolution, no civil wars, no Arab spring. Just vote and the government will be brought down or reelected according to the wishes of the people, he said.

“I am not against democracy,” Mahathir said. “But we must apply limits.”

He said Malaysia’s racial divisions may be exacerbated by a free-wheeling democracy, resulting in violence.

“I am not trying to be philosophical and erudite. I am merely trying to relate the things I observed in my country and in many other countries, particularly in the new democracies desperately trying to practice democracy only to obtain negative results,” Mahathir said.

He said dictatorships like the one in the Philippines during martial law was the result of democracy and the “temptations” that come with power. “Look at what happens when you choose the wrong people,” he said.

“In a democracy, sometimes we choose the wrong people,” he added. “Then we will have trouble.”

Mahathir said that when he was prime minister, he promoted his “Look East” policy and fashioned his economic program after Japan, the dominant economic power in Asia then. Recently, he said, he was asked by the Japanese if he was still looking to Japan, and he replied that he continued to do so “to learn from your mistakes.”

“When we look at models, look at both the right and wrong sides,” he said.

Despite his diatribe against the West, Mahathir said he refused to call the new century the “Asian Century.” Asia, he said, cannot exist by itself.

Mahathir said the financial and economic crises engulfing the West will affect Asian countries. Against the financial products of the West, which he said were really “gambling” and proved to be the West’s undoing, he urged Asian countries to “stick to manufacturing goods and producing services” and keep to the basics of sound economic development.