Gay activists reach out to Pacquiao 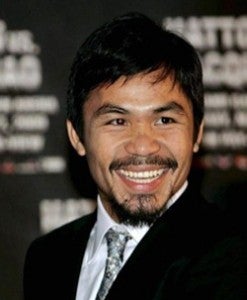 LOS ANGELES – Asian gay and lesbian leaders have reached out to Filipino pound-for-pound champion Manny Pacquiao in an effort to foster positive relationships.

“It’s important to have positive discussions about Lesbian, Gay, Bisexual and Transgender (LGBT) rights in our community,” said Ezra Evangelista, an official from API Equality-LA. “We encourage more discussion and would welcome MannyÕs participation.”

API Equality-LA is an organization committed to working in the Asian and Pacific Islander communities in Greater Los Angeles for the fair treatment of LGBT people and marriage equality through community education and advocacy.

Noel Alumit, a steering committee member for API Equality-LA, said it’s important to reach out to Pacquiao because he’s arguably the most famous Filipino person in the world today.

“Mr. Pacquiao has uplifted the spirit of Filipinos all over the world, including mine,” said Alumit in a statement. “ThatÕs why I was concerned by his comments on gay marriage. Young people look up to him.”

Ericson Herbas, who works on outreach in the organization, said, “Recent polls show that more and more people are getting used to the idea of gay marriage. And why not? Gay people want to experience the kind of happiness that marriage brings.”

Pacquiao, a devout Catholic, has been weathering a firestorm of late after a story about his view on gay marriage went viral last week.

Speaking to a writer from the Examiner, the Sarangani Congressman, eight-division world boxing champion, and devout Catholic Pacquiao said he did not believe in gay marriages.

“God’s words first … obey God’s law first before considering the laws of man,” he said to the Examiner.

“God only expects man and woman to be together and to be legally married.”
However controversial that statement may have been, it didn’t equal the reference that the writer included in the story.

Granville Ampong, writer for Examiner.com, referenced the controversial Bible passage Leviticus 20:13: “If a man lies with a man as one lies with a woman, both of them have done what is detestable. They must be put to death; their blood will be on their own heads.”

Many readers and national mainstream columnists picked up on the story and attributed the contentious reference as Pacquiao’s belief.

That caused an uproar which led to Pacquiao being banned from the Grove shopping center and an online petition from gay and lesbian advocates to oust the Filipino boxer from Nike, one of his primary sponsors.

Since then the writer owned up to the bible passage saying it was not from Pacquiao. Ampong apologized to the Pacquiao camp saying the Filipino champion “never said nor recited, nor invoked and nor did he ever refer to such context.”

The Grove has since lifted its ban on the Filipino champion and the petition, which had gathered over 4,800 signatures within a matter of days, closed.

In a follow up interview, Pacquiao apologized to the gay community about the confusion and also defended his stance on same sex marriage.

“I’m against same-sex marriage, but I’m not condemning you,” Pacquiao told Mario Lopez on Extra, an interview that was supposed to be filmed at the Grove. “My favorite verse is ‘Love one another as you love yourself. Love your neighbor.’ So I love everybody!”

It’s not definite yet whether Pacquiao will be meeting with the Asian gay leaders. Pacquiao is currently training for a June 9 welterweight championship bout against undefeated Timothy Bradley. Text messages to Team Pacquiao were not returned as of press time. (Joseph Pimentel/AJPress)