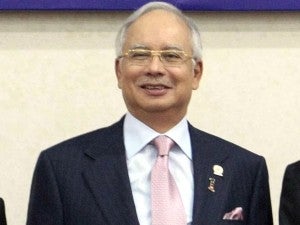 Malaysia supports the Philippines’ call for a “peaceful resolution” of its dispute with China over the Panatag (Scarborough) Shoal in the West Philippine Sea (South China Sea) in accordance with international law.

Malaysian Prime Minister Najib Razak stated his country’s position on the issue during a meeting on Tuesday with Vice President Jejomar Binay, according to Joey Salgado, Binay’s media officer and spokesperson.

“The two leaders only talked about the Panatag Shoal issue,” and not the six-nation conflict over the Spratlys group of islands, also in the West Philippine Sea, said Salgado, who is part of the Vice President’s delegation on his official trip to Malaysia.

In a text message to the Philippine Daily Inquirer, Salgado quoted the Malaysian prime minister as expressing support for a “multilateral solution” to the conflict.

The Philippines and Malaysia are among the 10 members of the Association of Southeast Asian Nations (Asean), which also groups Indonesia, Singapore, Brunei, Thailand, Vietnam, Burma (Myanmar), Laos and Cambodia.

Four of them—the Philippines, Malaysia, Brunei and Vietnam—are claiming ownership of the Spratlys group of islands, along with China and Taiwan.

In an address Tuesday before the Philippines-Malaysia Investment Partnership Forum in Kuala Lumpur, Binay urged Malaysia to “lend its wise counsel to the other parties” involved in the West Philippine Sea disputes.

“In the South China Sea, a broad regional approach to the problem awaits the wisdom and creativity of those interested in the permanent tranquility and stability of our international sea lanes,” Binay said.

“Malaysia, although also a claimant to the Spratlys, has not been drawn actively into any maritime incident, and could probably lend its wise counsel to the other parties,” he said.

Binay referred to the West Philippine Sea issues and the Muslim insurgency in Mindanao as among the “important hurdles” that the Philippines and Malaysia need to overcome.

“They are critical not only to our two countries but to the region as well,” he said.

In his remarks, Binay also invited Malaysian investors to “enter into joint ventures with their Filipino counterparts on housing development and mass housing.”

He appealed to Filipino and Malaysian businessmen to continue talking about joint ventures, “guided by the Filipinos’ bayanihan spirit and the Malaysian gotong royong of working together.”

“It makes more sense for our economies to try to grow simultaneously together. I believe we are already headed in that direction,” he said.

Marcos was not a war hero; he impoverished PH in his 20-year-rule – ABKD