An ‘Oranian’ takes his art seriously 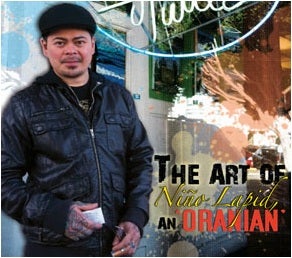 He may seem to be a late bloomer when it comes to doing art, but artist Niño Lapid takes his art seriously.

Born in 1974, Niño was raised in the Philippines by his famous mother, former Miss World 1973 1st runner-up and actress Evangeline Pascual.  He only moved here in the United States 12 years ago.  Although he was involved in multi-media production back home, he was actually a pre-school teacher and an assistant special education teacher then.  Fast forward, Niño is now doing what he loves best – art.  “I have been into drawing since I was a kid.  My lolo (Daddy Pike), would buy my drawings for one peso each.  I think I knew that I could draw when I was in second grade,” he said.  “Through the years, I have worked on canvas, leaves, paper and walls, and writable media.” Here in the Bay Area, Niño’s passion for art continued as a tattoo artist at Zebra Tattoo and Piercing in Berkeley and Walnut Creek.  “Doing tattoo art is an immense expression of a lifetime of trust and confidence between me and my clients,” he explained.  He also added that he has found the skin medium very challenging and meaningful, especially from hearing stories of his clients about the significance of a certain design.  An ‘Oranian’ talent

Adding to his credibility as an artist, Niño formally opened his art show last May 5 at Lounge 3411 in Oakland.  Entitled ‘Oranian,’ the exhibit features his talent in drawing and painting, his flair for color, coupled with the depth of his emotions.

Inspired by the art of famous artists like Michaelangelo, Picasso, Dali and Filipino artist Onib Olmedo, he can explain his art as a release of feelings and emotions.  “It’s my happy time.  For me, fun comes in when I am able to figure out effective strokes and make an effort to push myself to new distances,” he said.

Why Oranian?  Niño simply said that he wants to honor his hometown – Orani, Bataan.

“I was born and raised in Manila, but spent my fun filled and meaningful summers in Orani, Bataan,” he said and added, “My ancestors hail from Orani.  My mother (Evangeline Pascual) spent her growing up years in Orani, where her father, my well-loved grandfather, was born.”  Niño also spent some of his primary school years at the Orani North Elementary School.

Clearly, Niño carries the pride and artistic acumen of his roots.  He is inviting everyone to check his art exhibit, Oranian, at Lounge 3411, 3411 MacArthur Blvd. in Oakland.  The Oranian will run until June 2012.

Bataan (and not just Orani) is a province north of Manila that carries a lot of historical moments especially during World War II, including the infamous Bataan Death March, where thousands of Filipino and American soldiers died.

Although his exhibit does not directly contain artworks about Orani, it does not take away the essence that he is, first and foremost, an Oranian.