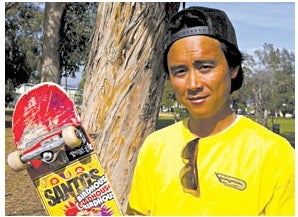 He is considered the Manny Pacquiao of the skateboarding industry, although Willy Santos has been doing it a lot longer in his sport than the Filipino boxing champ.

Unfortunately, Santos doesn’t get that same kind of recognition, which he deserves.

For all of his accomplishments and success in 20 years as a professional skateboarder, Santos of Mira Mesa, San Diego still can’t believe he’s been around this long.

“Did I ever imagine skateboarding was going to provide for me and my family? No, I never really thought it was going to be like that,” Santos told HBO in East of Main Street. “Looking back at it, ‘wow I still can’t believe it.’ I’m 35 years old I’m just so grateful for all those who’ve helped me along the way. I’m just so psyched for what skateboarding had done for me.”

“We wanted to look at Asian Americans who have embraced non-traditional paths and through their success have had an influence on both American and Asian American culture,” Jonathan Yi, the director, said at the time when East of Main Street premiered last year.

Santos is well deserving of the HBO feature. In the multi-billion dollar skateboard industry, there are only maybe a handful of Filipino skateboarders among the thousands of professionals around the world.

Santos is one of the industry’s first Filipino pioneers.

In the late 1980’s and throughout the 1990’s, Santos was probably the most popular Filipino-American in the states. Thrasher Magazine, one of the premier skate magazine, called him “one of the best street skaters during the dark early 90′s. He was pushing new tricks and winning proper gritty skatecomps (not your TV extravaganzas of today) with illustrious style and grace.”

Santos was featured in hundreds of skateboarding magazines, traveled around the world, and won several competitions and awards including being chosen as TransWorld Skateboarding skater of the year for 1992, placing third in the inaugural X-Games Street Contest in Rhode Island, winning the Munster World Cup Street Contest in Germany in 1997, the New Jersey Vans Triple Crown Street Contest in 1998, and the Gravity Games Best Trick Street in 2000, among others.

Santos was also one of the first skaters that Tony Hawk, the legendary skateboarder, chose to be part of his skateboarding team Birdhouse Project. A team that Santos is still currently a member of to this day.

In 1997, Santos had his own signature shoe made by Vans.

The awards and accolades are impressive in itself but what makes Santos awe-inspiring is that he accomplished all of this while he was still a teenager and during a time when professional skateboarders would only earn $300 to $500 for placing well in a tournament.

Santos, who turned pro at the age of 15, said by the time he was 16 years old, he had earned enough money to buy his own BMW.

Born in the Philippines, Santos’ family settled in Mira Mesa. His father was a US Navy engineer.

He said he just sort of fell into skating. He was into breakdancing, and riding BMXs before discovering his love for skateboarding.

In an interview with Asian Journal, he said he noticed a lot of kids in his neighborhood skating one day and decided that he wanted to do it too. That was the start of something extraordinary.

“That’s when skateboarding just took control,” he said. “I would skate as much as I could and anywhere. I was having so much fun.”

Santos went from learning how to skate down a steep road, to kick flip tricks to jumping over flights of stairs.

“Whether it’s just a simple trick or skating down the stairs, there’s just something satisfying, an accomplishment,” he said.

When he was 13, Santos began competing in amateur skate tournaments locally in the San Diego area. A friend of his started filming him and he submitted the tape to G&S, one of the large skateboarding companies at the time. G&S convinced him to turn pro and the rest is history.

Eventually, Tony Hawk split from his promotional company to start his own. One of the first people he recruited, to join Birdhouse, was Santos.

“He’s an amazing individual,” Santos said about Hawk to Thrasher. “He’s always been great to me as well as very supportive. When I got on the team, he hooked me up with a Honda Accord. It was awesome! ‘Thanks, Tony. For everything. I’m forever grateful to you. You’re awesome!’”

Since then Santos has traveled around the world and shot skating videos for the Birdhouse Project.

Santos said one of the things he’s most proud of in his careers is being placed in a position to give back.

The Philippines will always be his home, he said, and tries to make to go home whenever he can. He has donated to Gawad Kalinga and started the “Let’s Go Skateboarding Day” movement in the Philippines.

“Whenever I go to the Philippines I bring as much clothes and shoes as possible,” Santos told HBO. “When I leave I’m pretty much wearing the clothes off my back. Everything else I just give it out.

“We want to help out to the Philippines and bring skateboarding even more to the next level because there’s definitely some really awesome talent there,” he added.
He said he believes skateboarding brings everyone together.

Even at the age of 36 – which is considered old in skateboarding – Santos still travels and skates. He was recently in France for the Quicksilver Pro Tour.

He said his days of competing are over, though, something he decided not to continue five years ago. “I just got burnt out,” he said. “I had been competing my whole life.”

Aside from being active in the Filipino community, he’s also very much involved in the San Diego community where he runs his own skateboard shop called Willy’s Workshop.

“It will be a place for kids to not get in trouble for skating out in the streets,” Santos told Fox. “What I see important is one day my son will be out there skating one day. It’s for the future, you know. Even if I’m not able to skate the park, I’m going to make sure it happens.”

Though some will say that Santos is a victim of circumstance (if he had turned professional these days and accomplished what he has, he’d be a multi-millionaire and be known among this generation of fans as one of the best skaters around).

But Santos doesn’t think that way. He’s proud of everything he’s done for the sport of skating, and the Filipino-American community and takes nothing back.

“It’s been an amazing ride,” he said of his career. “I just hope to continue skating.”