Filipino WWII vet turns 100 with hope in his heart 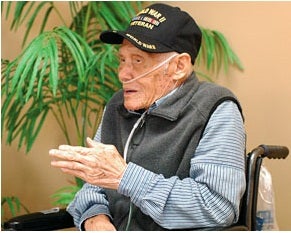 Pushing his own wheelchair down the halls of the Las Vegas nursing facility where he was staying, 99-year old Silverio Cuaresma was a picture of strength that belied old age.

Moments earlier, he refused an offer to sit in the chair and be wheeled to the center’s recreation room from his bedroom. Aside from proving his physical strength, Silverio also confirmed he was still sharp as a razor when during the interview with Asian Journal, the Filipino former soldier recalled in detail the greatest moments in his military career.

But it was when he talked about his fight to get recognition from the United States government that Silverio showed his passion and the principles that brought him to where he is now.

“I am happy to have lived this long. Everybody wants to become 100 years old,” said Silverio who will celebrate his100th birthday on June 19th.

Though afflicted with hypertension and chronic obstructive pulmonary disease, he still showed vigor uncharacteristic of someone his age. “I wake up at 4:00 a.m. and go to sleep at 10:00 p.m,” Silverio said noting how he spends a typical day at the nursing facility.

Throughout the day, he relishes talking to his roommate, a fellow veteran over coffee or tea, he said with a smile.

Silverio also recently got immersed in watching Filipino television shows to lessen his boredom, though he insists that ennui is not something that worries him much. “[Because] I can easily adjust to any situation,” he said again with his characteristic grin.

In much the same way, he described how seamlessly he had adjusted to life in Las Vegas since he moved from New York 12 years ago. “I like the climate in Nevada. It’s like that of the Philippines although it’s a little bit hotter here but I can adjust myself. I go with the flow,” he said.

His move to the US from the Philippines in 1984 was one that was more eventful. It was during that time when he started his own personal crusade for recognition from the government that he valiantly served some six decades earlier.

It was sixty-six years ago when US President Franklin Roosevelt promised military benefits to Filipinos, such as Silverio, who fought with the American military against the Japanese in World War II.  In 1946, however, the United State Congress passed the Rescission Act that stripped Filipinos of the benefits they were promised. Of the 66 countries allied with the US during the war, only the Philippines was denied military benefits for its soldiers.

“They excluded the Philippines. That is the ground of the battle. Why are they going to exclude it,” Silverio incredulously inquired.

Since the rescission, several bills have been introduced in the US Congress in an attempt to give full equity to Filipino war veterans. But it was only in 2008 through the Obama administration’s American Recovery and Reinvestment Act that the US government finally set aside $198 million for benefits of Filipino veterans. Under that law, the government had authorized a one-time lump sum payment of $9,000 each for Filipino veterans living in the Philippines and $15,000 each to those living in the United States.

Silverio noted that he had expected financial benefits from the US after the war had ended. Because he had relied on these funds to get him through retirement, he was naturally disappointed at not receiving it.

Still, what continues to be more frustrating to him is the reckless disregard of his service to the United States.

“I wonder why they insist that I do not have military service in the US Army and the Commonwealth army,” he said sadly in the interview.

Silverio was a Philippine guerilla intelligence officer at the height of World War II, documents in his possession showed.

The veteran recounted one of the most memorable moments of his Philippine military career happened in December 1944.

“During our mapping operation, as intelligence officer, I saw groups of Japanese building their camps in the provincial boundary of Pangasinan and Tarlac,” he told Asian Journal.

“I had only 20 men. But Captain Prado said he would give me another 20 men. We won that battle. We defeated the Japanese,” he said.

Philippine Infantry Capt. Candido Prado is the person who certified a very old piece of paper that showed Cuaresma was appointed second lieutenant “in the field by order of Edwin P. Ramsey, major, US Army commanding” on April 22, 1943.

Military historians credit Ramsey as the leader of the last horse cavalry charge in U.S. history on Jan. 16, 1942. He led Troop E of the 26th Cavalry Regiment headed toward the village of Morong, a Las Vegas Review Journal report stated.

General Jonathan Wainwright, the North Luzon commander, ordered Ramsey, a first lieutenant at the time, to take the lead into Morong, the report noted.

Documents in Silverio’s possession showed that he was an intelligence officer for Squadron 427 of the First Provisional Regiment of Tarlac of the East Central Luzon Guerrilla Area. A roster also showed, “Cuaresma, Silverio S., 2nd Lt., USAFFE,” as the No. 7 officer on a list of 85 soldiers.

Silverio in the interview recalled that he led guerillas in several raids that killed Japanese troops until Gen. Douglas MacArthur returned to liberate the Philippines on Oct. 20, 1944.

When the war ended, Silverio went to work for the Philippine government’s Bureau of Animal Industries, retiring at 70 years old, and then moved to the United States seven years later after having been petitioned as an immigrant by one of his New York-based sons.

As soon as the Filipino veteran arrived in New York in 1984, he launched his fight to be recognized for his services to the United States.

“He thought that being in the US would greatly help him with his appeal [for recognition] to this government,” the veteran’s son Silverio Jr. said.

But the older Silverio’s efforts were to no avail. His first letter to the Department of Veterans Affairs (VA) in 1984 was answered eight years later with an instruction to write to the Philippine government instead.

Since then several appeals have been made to assert that he did serve the US government during World War II while a current case is still pending at the Court of Appeals.

Through his fights, he was supported by his wife who, under the most recent law, would have received financial benefits if Silverio died. His wife passed away just last February.

While Silverio’s seemingly singlehanded fight for recognition was going on, several other organizations have also launched their own crusade for Filipino World War II veterans to be recognized by the US government.

In Las Vegas where Silverio has been a resident for 12 years, the Filipino-American Veterans of Nevada and Families (FAVFA) is spearheading the fight for these Filipino former soldiers.

One of the group’s most recent victories is to acquire the assistance of the Nevada state legislature in asking President Obama to reconsider the soldiers’ denied compensation and recognition claims.

Similar to Silverio’s case, this is even if the veterans had proof of US military service from the Philippine government.

FAVFA had noted earlier that the NPRC list which is used by the US government to determine military service, including service given in World War II, is incomplete.

Last year, the group requested the White House Initiative on Asian and Pacific Islanders to take up their issue with President Obama. In addition, they also asked Gov. Brian Sandoval to help in their appeal for reconsideration.

The group has also been lobbying for the passage of House Resolution 210, known as the Filipino Veterans Fairness Act of 2011, which directs the VA “to take into account any relevant service documentation, including documentation other than the Missouri List or the list of all discharged and deceased veterans from the 20th century.”

“He was fighting for his own personal recognition as a World War II veteran. We didn’t know about (others’ efforts) until we found this group,” Silverio Jr. said of his father’s fight.

“It is apparently a big thing going on that we didn’t know. It’s a good thing that we did find [FAVFA],” he added.

FAVFA, incidentally, will honor Silverio’s 100th birthday during its Memorial Day Remembrance Dinner on May 27 at the Gold Coast Hotel & Casino.

At the nursing facility where he agreed to sit down for an interview, Silverio said he remains hopeful that the government will recognize his service soon.

“I still have hope because as I said my appeals are strong,” he said with a smile that showed a soldier’s valor and determination.