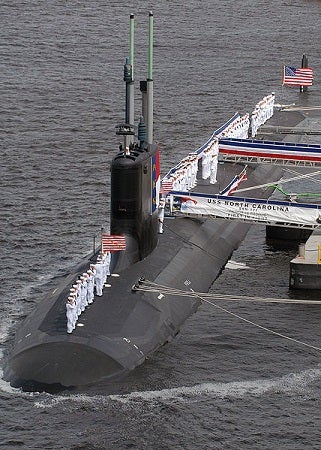 This came amid tensions between China and Philippines disputing over Scarborough Shoal, located 124 nautical miles off Zambales.

The North Carolina has a crew of 133, and has conducted “a series of missions showcasing the latest capabilities of the submarine force.”

“The crew is proud of our recent contributions as part of our country’s commitment to maintaining freedom of navigation, peace and stability in the region,” said Cmdr. Richard Rhinehart, North Carolina’s commanding officer in a statement.

“Everyone is looking forward to some good liberty, rest and relaxation during our port visit here in Subic Bay,” said chief of the boat, master chief Jon Consford. “The crew has worked hard and developed tremendously as a team over the last five and a half months. I could not be prouder to have had the chance to serve with some of the finest Sailors our nation has sent to sea.”

North Carolina was described as “the fourth submarine in the Virginia class, the Navy’s newest class of submarine and the first ship designed for the post Cold-War environment.”

“She is designed to operate with stealth, agility and endurance in the world’s littoral regions, as well as the deep oceans. During this maiden deployment, her crew provided the value of the ship and their training by completing a wide variety of missions assigned by their operational commande,” Bollinger said.

“She brings to the region the capability to conduct the full spectrum of potential submarine missions including anti-submarine warfare, anti-surface ship warfare, strike, naval special warfare involving special operations forces, intelligence, surveillance, and reconnaissance, and mine warfare,” she added.

Meanwhile, Philippine Navy spokesman Lieutenant Colonel Omar Tonsay said that the visit has nothing to do with the ongoing standoff in Scarborough.

“Walang kinalaman yan, yun nga inuulit namin, the Philippines stands in the crossroads of a major oceanic sealane yan eh, so talagang geographic ang location natin, dadaanan at dadaanan tayo ng mga barko, that includes them (It has nothing to do with this, that’s what we’re trying to point out again and again. Our location is geographic so ships will pass us by),” Tonsay said.

Read Next
Fil-Am Chamber Music Society presents cello-piano recital
EDITORS' PICK
A laptop that maximizes your WiFi so you can maximize your productivity
Why Tagle is a leading papal contender
In Borongan, nuns play hoops (not mahjong)
Powered by style, innovation and passion
House energy committee chair Arroyo bats for cheap electricity
KWF has no power to ban, censor written works – Lagman
MOST READ
Why Tagle is a leading papal contender
Zubiri on SRA mess: Shameful, disgusting
Gilas gets solid core with Clarkson, Sotto planing in
Arjo Atayde reveals proposal to Maine Mendoza was ‘more than a year’ in the making
Don't miss out on the latest news and information.