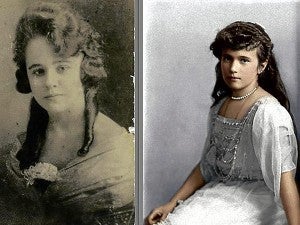 COMPARE THE PORTRAITS The picture at left is that of the writer’s “Grandmama Tasia” when she was a young girl. The one at right is the portrait of the young Grand Duchess Anastasia Romanov of Russia, which she found on the Internet. CONTRIBUTED PHOTOS

MANILA, Philippines – Tales of the supposed escape of Anastasia Romanov from Russia have gripped thousands for decades, fueling speculation that a daughter of Russia’s last sovereign ruler survived the revolution that obliterated her immediate family.

But as far as science is concerned, Anastasia never escaped: She died along with her parents Czar Nicholas II and Alexandra, sisters Olga, Tatiana, Maria and brother

Forensic scientists put to rest the mystery in 2009, announcing that genetic tests on discovered remains accounted for all the members of the Romanov family.

The fall of the Romanovs started in 1917, when the Bolshevik revolution left Nicholas II with no choice but to abdicate. He and his family were exiled to Yekaterinburg in central Russia and executed on July 17, 1918.

The lack of details about the family’s death, however, allowed rumors of a surviving Romanov family member to spread.

The rumors were sustained by at least 200 women who claimed to be the lost grand duchess of Russia, offering sensational stories and pleas for recognition as the heir to the Romanov line.

Last week, the Inquirer published the story of a woman who claimed her grandmother may have been Anastasia and who, according to her account, arrived by boat in the Philippines after the Russian revolution and raised a family with a Filipino husband.

In 1979, the remains of the czar, his wife and their three daughters were unearthed, but the discovery was kept secret until the collapse of the Soviet Union in 1991.

Genetic tests conducted in 1991 confirmed the remains to be the Romanovs, but the missing remains of two other children—Alexei and another daughter—inspired speculations that one or both survived the killings and escaped Russia. A search for a second grave ensued.

In July 1998, the remains of Nicholas II, his wife and three children were laid to rest at the Saints Peter and Paul Cathedral in St. Petersburg, Russia. Two years later, the Russian Orthodox Church canonized the Romanov family for their “humbleness, patience and meekness” throughout their exile.

In 2007, archaeologists found 44 bone fragments and teeth near the site of the first grave and later identified them to belong to a boy and girl. The Russian government invited a team of scientists to conduct DNA testing on the newly discovered remains.

The remains were subjected to three types of genetic tests, which pointed to a strong relationship of the first batch of remains with the second batch.

One test confirmed that the bodies were children of Alexandra. Another test matched the remains to the profile of Nicholas II. One more test revealed that the second batch of remains were 4.3 trillion times more likely to be related to both Nicholas II and Alexandra than two random individuals.

All the findings were also compared with the genetic profiles of the living relatives of the Romanovs, bolstering the identities of the remains.

The results of the  study, which was funded by the US Armed Forces DNA Identification Laboratory and the Innsbruck Medical University, were published in March 2009.

Michael Coble, lead author of the study, minced no words about the findings: “We have virtually irrefutable evidence that the two individuals recovered from the 2007 grave are the two missing children of the Romanov family.” Lawrence de Guzman, Inquirer Research