China tells US: Respect our interests in Asia 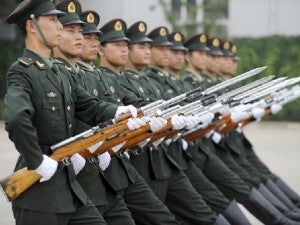 Members of the Guards of Honor of the Three Services of the Chinese People's Liberation Army practicing during a training session at a barracks in Beijing in this July 2011 file photo. AFP

BEIJING—China on Tuesday called on the United States to respect its interests in the Asia Pacific, as Washington seeks to boost its influence in the region.

China’s territorial disputes with countries including Japan, South Korea, the Philippines and Vietnam have intensified in recent years and its neighbors have accused Beijing of behaving aggressively.

“We are ready to work with the United States and other countries in this region to develop an Asia Pacific that enjoys greater stability and development,” Foreign Minister Yang Jiechi told a news conference on the sidelines of the country’s annual parliamentary session.

“At the same time we hope the United States will respect China’s core interests and concerns.”

President Barack Obama unveiled a new US defense strategy in January aimed at countering China’s growing power, drawing strong criticism from Beijing which says it poses no threat to any other nation.

China lays claim to essentially all of the West Philippine Sea (South China Sea), where its professed ownership of the Spratly archipelago overlaps with claims by Vietnam, the Philippines, Taiwan, Brunei and Malaysia.

Beijing and Tokyo also have a long-standing dispute over an uninhabited but strategically coveted island chain known as Senkaku in Japanese and Diaoyu in Chinese, which lies between Japan and Taiwan in the East China Sea.

Premier Wen Jiabao said Monday China must enhance the ability of its military to win “local wars”, a day after the government said defense spending would top $100 billion in 2012 — an 11.2 percent increase on last year.

The Asian giant already has the world’s largest armed forces and this latest double-digit increase in its defense budget has fuelled concern among its smaller neighbors Japan, Taiwan and the Philippines.

Yang also told reporters that China-US relations were “moving forward” and Beijing welcomed “a constructive role by the United States in this region.”

Territorial disputes over the West Philippine Sea should be “properly resolved through negotiation”, he added.