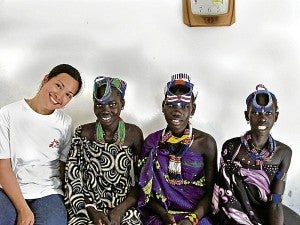 DR. NATASHA REYES of Médecins Sans Frontières poses with her patients in a clinic in Pibor, South Sudan. Photo from MSF

Sans her doctor’s white coat, Dr. Natasha Reyes of Bacolod City stands up to her conviction of providing lifesaving care to the world’s most neglected people.

“One thing I gave up is the usual image of my profession—that the idea of being a doctor is wearing a white, clean coat; everyone is calling you  ‘doc’; you have your own clinic, a secretary and you play golf,” says 35-year-old Natasha, a doctor with the international medical humanitarian organization Médecins Sans Frontières (MSF).

Also known as Doctors Without Borders, MSF is present in more than 70 countries, mostly those affected by armed conflict, epidemics or natural disasters.

Natasha, called Tasha by friends, is a psychology graduate of University of the Philippines (UP), and completed her medical studies in the University of Sto. Tomas (UST) in 2000. She specialized in emergency medicine, which she describes as “a little bit of everything—a bit of surgery, a bit of pediatrics, a bit of internal medicine.”

She says she initially joined MSF in 2007 out of curiosity. But it has turned out to be a career and a fervent passion. So far, she has completed missions in India, Kenya, South Sudan and Colombia. She has braved conditions in some of the world’s most dangerous places—Libya, Afghanistan, Pakistan. She was back in the Philippines in 2009 to lend a hand in the aftermath of devastating Tropical Storm “Ondoy.” And the list goes on.

“I feel instant gratification when I see patients improve in a short duration of time. I like seeing immediate results,” she says.

On the emergency nature of the work, she adds: “I like the action. I like the rush. I also like to think that wherever I am sent, I can do something for the patient.”

Even as a little girl, Tasha dreamed of becoming a doctor. She was eight when her family moved to Metro Manila, which allowed her a choice of some of the country’s best medical schools and hospitals.  After graduation from UP and UST, she completed her four-year training at Makati Medical Center in 2006.

She was at a crossroad when she received word that her application to work as a doctor in Australia had been approved. This was about the same time she was invited to join MSF.

“Everyone I knew was sending their applications to work in Australia or other countries. So, I had applied too. However, I also really wanted to work with MSF. I knew about the organization a long time ago. In my early teens, I read about its mental health activities in Russia. I was also aware that they were in Samar in the late ’90s, and also present in Manila. Their principles of neutrality, impartiality and independence really appealed to me.  It was always at the back of my mind that someday I would work with MSF in the Philippines.”

“When I was ready to join MSF, they had already left the country. But I met a colleague who had just finished his deployment with MSF in Kashmir. He encouraged me to try working with MSF outside the Philippines.”

“Many people I know think that (emergency humanitarian work) is something individuals do only in their 20s then they eventually settle down, nurture a family and live a very comfortable life. Sometimes when I go home, people would ask me if I am staying home for good or if am I going to get a ‘real job.’”

But she adds that her family and close friends are very supportive of her decisions.

When post-election violence erupted in Kenya in 2008, Tasha was there working in a primary health care clinic for displaced residents.

“As a medical doctor, I really saw what MSF can do to help people who are in great need to survive. We were treating patients, providing tents and hygiene kits for tens of thousands of people affected by the violence. Being new to MSF, I realized that we can make a big difference because we are part of an organization that has the medical expertise honed by its years of experience in responding to bigger-scale humanitarian emergencies.”

A sincere smile and seeing her patients survive given their limited access to facilities keep her feet on the ground and connect her to the reality of what each drop of her sweat is worth.

In the very remote town of Pibor, South Sudan, she dealt with a woman who delivered a premature baby girl. The baby was 28 weeks and only weighed 900 grams. The baby was so small, Tasha could carry the baby with one hand.

“I was with a very experienced Kenyan midwife. But we had no incubator, and there was no neonatal intensive care unit in the whole of South Sudan. We didn’t have facilities to help her survive. But the baby was coming out and we had to manage regardless of her small chances of survival.

“We were so surprised to hear the baby give her first cry—she was fighting to live. We wrapped her in a survival blanket and put her in a vaccine box to keep her warm … After 48 hours, the baby started to suck. It was a team effort … Later, we named her Laila after the daughter of the famous ring fighter Muhammad Ali.”

The life I want

“This is the life that I want. My mom always fears for my safety but she always tells me to pray to God to place me where He wants me to be. So even when I am in Colombia’s rebel-held jungles or stabilizing a war-wounded patient in Afghanistan, I feel safe because I am meant to be there and to help those who don’t have access to health care.”

MSF is an international medical humanitarian aid organization founded by doctors and journalists in 1971.   MSF  won  the Nobel Peace Prize in 1999. To learn more about MSF activities and how to work with them as a medical or nonmedical practitioner, visit www.msf.org.hk.