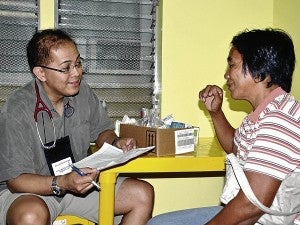 DR. BERNARD QUEBRAL, who coordinated the medical mission, talks to a patient in the group’s recent mission in Alaminos City. RAMIL RAPUES

Thousands of patients came for treatment and surgical procedures during the mission from Jan. 29 to Feb. 2, said Dr. Bernard Quebral, the mission coordinator.

Quebral also led the 77-member mission, composed of surgeons and operating room nurses, to his home city of Alaminos and to Bataan from Feb. 3-4.

“These patients would never have had the money for these medical procedures,” Quebral said.

“The group also donated equipment to the hospital worth $1.1 million,” he said.

Quebral’s experiences early in life inspired him to help people who cannot afford medical attention. Born in this city 48 years ago to a doctor and a midwife, he grew up seeing his parents attend to the poor.

“What you see early in life becomes a part of you,” he said.

When he was 10, he accompanied his mother deliver a baby in a hut illuminated only by a kerosene lamp. “She refused the money, about P5, that the young mother tried to hand her, saying she should use it instead to buy milk,” he said.

Quebral said he has been working with the group for 12 years. It has conducted missions in Batangas, Samar, Cebu and Negros island.

The PMMA has a core of volunteers who go to Africa and Central America, most of them his friends, and all of them active medical practitioners.

“There was a 62-year-old man who had a heart attack in front of us,” he recalled. “He (the patient) stopped breathing, but survived. So far he is OK and we transferred him to another hospital,” he said.

Tracy Berscheid, the mission’s outpatient coordinator, said what breaks her heart is when they have to turn people away due to scheduling conflicts and other limitations.

For some medical personnel, going on a mission could be stressful, said Norman Graf, an anesthetist (a nurse responsible in administering anesthesia).

“It is stressful going to a place working with equipment you are not familiar with and not having all the supplies. But it works out and everyone really works as a team in an amazing way,” he said.

For doctors, “the most touching thing, with the language difference, is a smile and a nod. Few speak English but they show their appreciation with a smile,” said Dr. Thomas Okner, an otolaryngologist (a doctor who specializes in treating diseases involving the ears, nose and throat).

Of the 77 members of the mission, nine are of Filipino descent, including nurse Naomi Quillopa from Bicol. Married to one of the surgeons, Quillopa is in charge of recruiting operating room (OR) nurses and running the OR.

To be a mission member, Berscheid said one has to donate $500 (P21,220) and help in raising funds to buy medicines.

Berscheid said she used the money she got when her mother died to buy the plane tickets and to pay her membership. “I really wanted to do this,” she said.