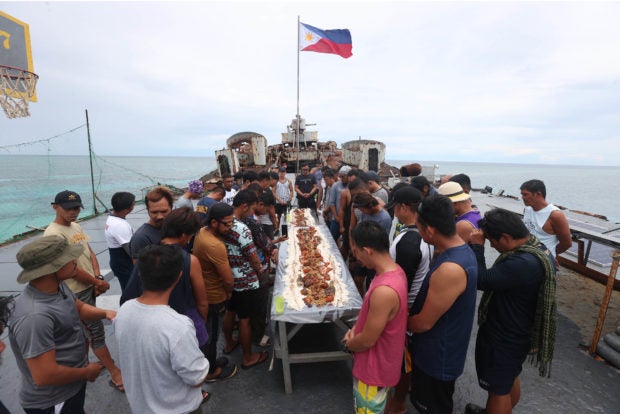 THEY’RE HERE, THEY’RE READY Members of the Navy say a prayer before a “boodle fight” on June 21 onboard the rusting BRP Sierra Madre at Ayungin (Second Thomas) Shoal. Deliberately run aground in 1999, the vessel serves as one of the nine military posts asserting the country’s sovereignty in parts of the West Philippine Sea. —MARIANNE BERMUDEZ/FILE PHOTO

MANILA, Philippines — The Philippines is entitled to exercise its rights in Ayungin Shoal as it is part of the country’s territory, the Department of Foreign Affairs (DFA) said on Tuesday after the reported Chinese harassment.

The Philippine Coast Guard over the weekend reported that a Chinese Coast Guard vessel drove away a Filipino fishing boat in Ayungin Shoal, which is located 315 kilometers off Palawan.

“Ayungin Shoal is part of the exclusive economic zone and continental shelf of the Philippines. The Philippines is entitled to exercise sovereign rights and jurisdiction in the area, without any intervention from another country,” DFA spokesperson Teresita Daza told reporters in a message.

“Filipino fishermen are free to exercise their rights and take whatever they are due under Philippine and international law, particularly the 1982 UNCLOS (United Nations Convention on the Law of the Seas) and the final and binding 2016 Arbitral Award,” she added.

In 2016, the Permanent Court of Arbitrarion favored the Philippines’ claims in the West Philippine Sea and invalidated China’s nine-dash line claim in the South China Sea.

The government, the DFA said, formed a “permanent presence” on Ayungin Shoal in 1995 with the BRP Sierra Madre, the actively commissioned Philippine naval vessel.

The agency is just waiting for official reports from military and law enforcement agencies on the incident, Daza said. The reports will be the basis of the DFA’s next move.

The DFA assured the public that they are “vigilantly” monitoring developments in the West Philippine Sea, especially after President Ferdinand Marcos Jr.’s meeting with Chinese President Xi Jinping during the former’s state visit to China.

Earlier, Marcos said that Xi pledged to “find a compromise and find a solution” for Filipino fisherfolk to continue fishing in the West Philippine Sea.