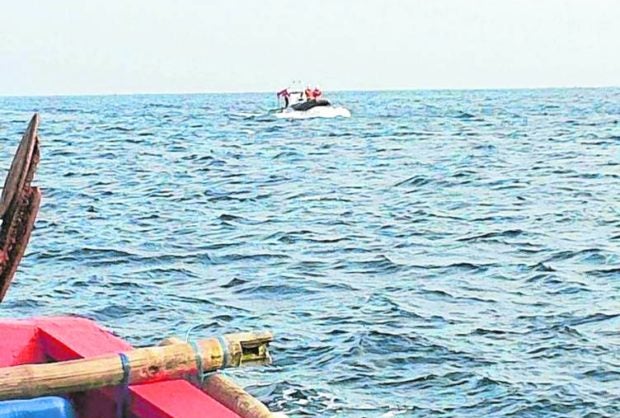 MANILA, Philippines — Just days after the Philippines and China supposedly reached an agreement in which China would allow Filipinos to return to their own fishing grounds in the West Philippine Sea, a China Coast Guard (CCG) vessel drove away a Filipino fishing boat while in the waters of Ayungin Shoal early this month, according to the Philippine Coast Guard (PCG).

On Saturday, the PCG said it was investigating the incident at the shoal, also called Second Thomas Shoal, located 315 kilometers west of Palawan province and within the country’s 370-km exclusive economic zone.

It cited the account of fishermen from the Palawan capital of Puerto Princesa led by Lito Al-os, who said they were fishing at Ayungin on Jan. 9 onboard their boat Ken-Ken, when a CCG ship with bow No. 5204 approached their area.

In a statement describing that incident, the PCG said “the vessel maneuvered toward the fishing boat at a distance of approximately 800 yards (730 meters) and launched a rigid hull inflatable boat (RHIB). The CCG personnel onboard the RHIB gestured [to] the Filipino fishermen to leave the area, coupled with verbal warnings in Chinese using a megaphone while waving a Chinese flag.” The PCG also shared with the media a video of what had happened, as recorded by the fishermen.

“That was the China Coast Guard telling us to get out of Ayungin or Second Thomas. Pity the Filipino fishermen,” one of them said in the video, which further showed CCG 5204 still following Ken-Ken for some time, even after the fishing boat had left the shoal.

CCG 5204 is familiar to the PCG, because on Jan. 15, 2020, it conducted joint search and rescue drills with that vessel, in what was then reported as the first maritime exercise between Manila and Beijing.

A news release posted on the PCG’s website describes the Chinese ship as a 102-m vessel whose “assets [included] water cannons used in firefighting assistance.”

The joint drill, held before the pandemic, was witnessed by Maj. Gen. Wang Zhongcai, director general of the CCG.

Apart from the search and rescue exercise, CCG 5204 also brought to Manila donations of rice and N95 masks for evacuees of the Jan. 12 eruption of Taal Volcano.

In response to the ship’s trespassing, the PCG said it has deployed the BRP Teresa Magbanua and several other vessels to patrol the waters around Ayungin.

The PCG is also gathering more information which it said it will forward to the Department of Foreign Affairs.

Foreign Affairs Spokesperson Tessie Daza told reporters on Saturday that the department is awaiting that report, after which it will “take the appropriate diplomatic action.”

On Monday, 11 days after his state visit to China on Jan. 3 to Jan. 5, President Ferdinand Marcos Jr. said he and his Chinese counterpart Xi Jinping had reached “an agreement that China will not stop our fishermen from fishing.”

Mr. Marcos also said Xi “promised that we would find a compromise and find a solution that will be beneficial so our fishermen might be able to fish again in their natural fishing ground.”

“They will continue to allow our fishermen to fish in the fishing grounds that they have been to, they have used for many generations. That’s it. It’s that simple,” the president added.

—WITH A REPORT FROM JACOB LAZARO

PH working to avoid getting ‘trampled’ by US and China