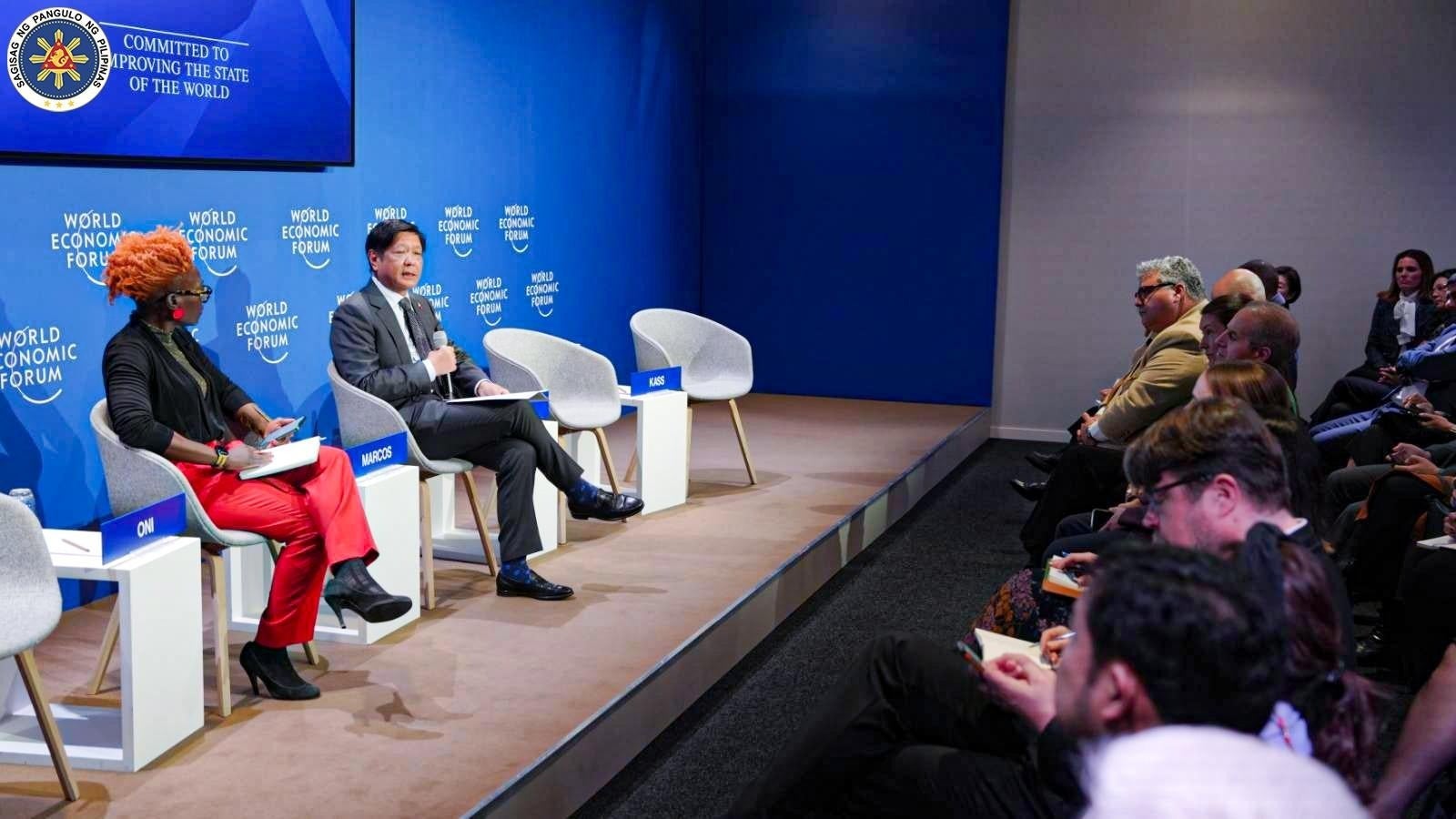 FOOD SECURITY TALK President Ferdinand “Bongbong” Marcos Jr. calls for systems-based and data-driven cooperation to achieve food security at the “Moving Towards Nutrition Security” program of the World Economic Forum in Davos, Switzerland. In his speech, Marcos recommended boosting production, investing in infrastructure, logistics and systems to improve food access, and encouraging a healthy lifestyle, according to the Palace. —MALACAÑANG PHOTO

DAVOS, SWITZERLAND — The West Philippine Sea is something that keeps him “awake at night, in the day and most of the time,” said President Marcos as he asserted the Philippines’ sovereign and territorial rights to a global audience.

During a one-on-one forum with Marcos on Wednesday, World Economic Forum (WEF) president Børge Brende asked him what was his main concern relating to the South China Sea issue. “Is it these islands or is it your fishing vessels or is it the principles for what defines what is Filipino territory and what is Chinese territory?”

Marcos replied, “All of the above.”

“We have no conflicting claims with China. What we have is China is making claims on our territory and that is … how we approach the problem that we find,” he said.

But the Philippines has established its baselines, he said, adding that these baselines have been affirmed by the United Nations Convention on the Law of the Sea (Unclos).

He was referring to the July 12, 2016, ruling by an arbitral tribunal formed under Unclos that invalidated China’s claims to most of the South China Sea, including the West Philippine Sea, waters within the country’s 370-kilometer exclusive economic zone.

The tribunal rejected Beijing’s nine-dash line demarcation of its claims, which China used to justify its reclamation to build artificial islands that had been turned into military outposts.

Manila’s arbitral victory is not recognized by China.

“We lived with them for many, many years without a problem. And suddenly, things have changed. So, I suppose China has some strategic concerns that have caused them to do this,” said the President, who had just visited Beijing before traveling to Switzerland for the weeklong WEF annual meeting.

Marcos said that “there was no way to avoid” raising the maritime issues with Chinese President Xi Jinping when they held talks in Beijing.

“I would not be doing my job if I did not bring up these issues with President Xi when I had the opportunity,” he said.

As he was aware that there’s no simple solution, Marcos said he had chosen to raise issues that had a good possibility of being resolved, like the movement of the Philippine and Chinese coast guards, Filipino fishing boats and the occasional visits by US ships whenever Washington wanted to make its presence felt in the region.

Brende cited news that Japan, the biggest US ally in Asia, was planning to double its defense budget from 1 percent to 2 percent of gross domestic product. When he asked Marcos whether this was something on the table, the president said, “there is no point the Philippines building up its armory.”

Marcos said he thought about this in the context of the Ukraine-Russian war.

“I think all of us were quite surprised, especially us in the Philippines, to think that a war in Eastern Europe would affect agriculture in the Philippines, and I guess it just goes to show how well connected that is … if a similar situation would arise in the region, then it would be disastrous not only for the region but for the rest of the world,” he said.

Meanwhile, he affirmed the principle of “centrality” adopted by the Association of Southeast Asian Nations (Asean).

In other occasions during the forum, Marcos stressed that there was no going back to the “Cold War” mentality of having to choose between rival spheres of influence.

This is seen in what analysts cite as Marcos’ bid to “re-center” Philippine foreign policy in a world where the United States and China are in fierce competition for both political and economic influence.