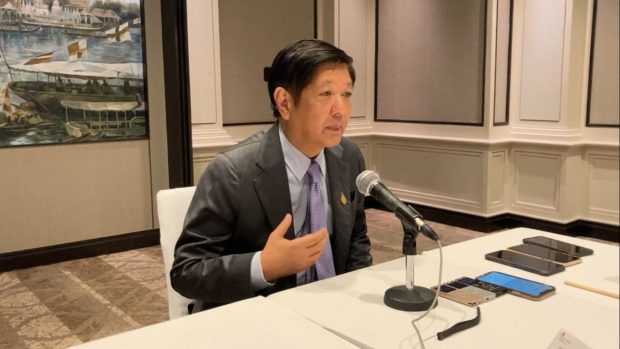 ZURICH, Switzerland — President Ferdinand Marcos Jr. believes he has accomplished his mission to put the Philippines on global investors’ radar via the World Economic Forum (WEF) platform as he justified bringing along a large delegation to the weeklong convention of CEOs, heads of state, and movers and shakers hosted by the upscale ski resort town of Davos.

“We are satisfied that we were able to do most, if not all, that we wanted to do while we were here,” Marcos said on Friday in his address to about 700 members of the Filipino-Swiss community at the Hyatt Regency hotel before flying back to Manila that same night.

He was greeted like a rock star by the Filipino diaspora that gathered here, waving the Philippine flag and chanting “BBM!”

“They keep saying that we have to position ourselves properly for the new global economy …. That’s what we are doing now,” he later told a press briefing.

His team has described this WEF participation — the first for a Philippine head of state in 10 years — a timely showcase of the Philippine growth story which, at an estimated pace of 6.5 percent to 7 percent this year, would be the fastest in Southeast Asia. This is in stark contrast to the looming global recession this year.

He also floated the idea of a sovereign wealth fund called Maharlika Investment Fund. (See related story on this page )With investment promises aplenty, Mr. Marcos suggested that it would take some time to reap the fruits of what was sowed in Davos, where representatives of big global corporations like Black Rock, Morgan Stanley, and Glencore committed to put more chips into the Philippines.

“This is a process. You don’t go one time and you come home and you know, everybody is going to invest 1 trillion dollars already. It’s not like that,” he said. “We have to introduce them to the Philippines again.”

Marcos also responded to criticisms back home about the lavish spending for his big entourage.

“Well, the delegation was large, but half of it was private,” he said. “They came here on their own. They stayed in their own places. They made their own arrangements, although they are technically part of the delegation.”

“So the delegation essentially just consists of the Cabinet secretaries, myself, the Speaker [Martin Romualdez], and of course the staff that support them,” he said. “You saw the plane and it was almost empty. We didn’t fill it up. We don’t have that many people — that the government is paying for.”

The government chartered a Philippine Airlines flight designated as PR001 to bring the presidential party, including some from the private sector, to and from Zurich.

“So it doesn’t make any difference how many people came on [board],” Marcos said.

The president said some members of Congress also traveled to Davos, about a two-hour drive from Zurich, because the team wanted lawmakers to discuss policy changes.

Malacañang did not confirm or deny a report that there were at least 70 in the entourage.

Of the 18 core delegates, 11 were registered as “public figures.” There is no available estimate on the number of security and support staff.

Marcos said each senior official brought along a staff so that if there was something that needed to be done, they could do it immediately.

Looking at the WEF’s list of public figures, the Philippines had the most from in Asia with 11, followed by South Korea with 10.

The Philippines’ WEF delegation is as big as that of the United Arab Emirates. Overall, the United States had the biggest team with 20 representatives.

When then President Benigno Aquino III attended the WEF in 2013, he had 63 in his party — 42 from Malacañang and the rest were businessmen and private sector representatives.

Aquino was among nearly 50 heads of state who attended.

His administration allocated P49 million for his participation as well as the expenses for the delegation. The WEF charged about 23,000 Swiss francs for attendance at that time, but the fee was waived for the Malacañang delegation.

In 2009, Arroyo’s trip to Davos, which was followed by a stop in Washington, cost P123 million. She brought an official delegation of 61, and about 20 of them accompanied her to the United States.