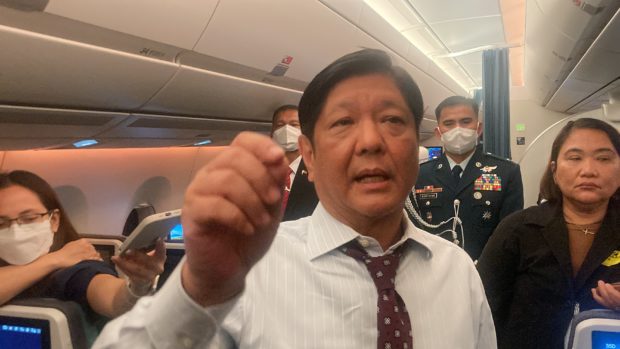 DAVOS — President Ferdinand Marcos Jr. aims to pull in investors from Middle Eastern countries who are looking eastward for new opportunities, banking on the presence of a huge overseas Filipino community in the oil-rich region.

In an open forum on Tuesday at the World Economic Forum (WEF) annual meetings in the Swiss Alps, Marcos was asked how he saw possible engagement with Gulf countries, which now consider Southeast Asia as a new investment destination.

In response, the president said he would welcome any major capital-intensive investment in the Philippines right now as the country was trying to claw its way out of its debt burden.

According to Marcos, Southeast Asia needs to regain its position prior to the COVID-19 pandemic, noting the region was a fast-growing economy while retaining the basic elements that brought it to that point before the pandemic.

The Philippines, Marcos said, has a very good foundation with regard to the relationship with Gulf countries because of the huge concentration of OFWs there.

“Because in the talks that we’ve had with some of the leaders from the Middle East, the discussion always begins with the overseas Filipino workers,” Marcos said.

Trade also always comes into play, especially with the Organization of Petroleum Exporting Countries (OPEC) members’ very expansive and aggressive spending plan for the next few years, the president noted.

Trade becomes part of the discussion with Arab nations as the Philippines speaks about its planned sovereign wealth fund, Marcos added.

“Some of the examples that we’re looking at are the ones in the Middle East because they have been the ones that have been most successful,” he said. “The connections are there. We just not have put it in that area. But I’m sure that any opportunities that we will be given… have to take full advantage of.”