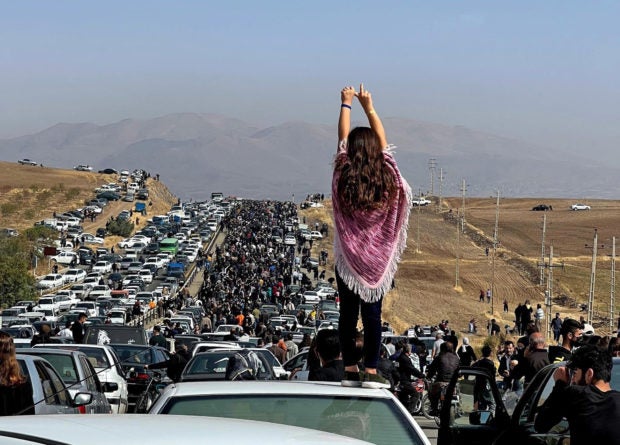 This UGC image posted on Twitter reportedly on October 26, 2022 shows an unveiled woman standing on top of a vehicle as thousands make their way towards Aichi cemetery in Saqez, Mahsa Amini’s home town in the western Iranian province of Kurdistan, to mark 40 days since her death, defying heightened security measures as part of a bloody crackdown on women-led protests.(Photo by UGC / AFP)

The Iranian people continue to raise their voices after the death of Mahsa Amini. However, it seems mainstream outlets keep the world from hearing them.

According to Iran International, Iranians complained that their Instagram posts have become restricted.

Activists noticed that the platform removed their hashtags, posts, and videos. Also, they claim that it removed public access to their direct messages.

Iran International added that 1500tasvir, a channel that features popular Twitter and Instagram accounts dedicated to Iranian politics, can no longer see videos from citizen reporters.

Instagram allegedly removed posts with the hashtag #IWillLightACandleToo. It was for the 176 victims who died in January 2020.

It was when Iran’s Revolutionary Guard fired two missiles at a Ukrainian passenger plane near Tehran in January 2020.

Instagram explained that it restricted the hashtags after receiving user reports for not meeting community guidelines.

The British news outlet spoke with a former content moderator who “personally knew some reviewers who supported the Iranian regime and received instructions from Iran.”

He said, “A reviewer can independently delete a post that has been reported without facing any serious consequences.”

“If an auditor realizes, at most, your accuracy rate may drop a percentage [point] or two.”

In response, Telus International told the BBC that the allegations were fake. It released a statement saying it “does not have, nor has it ever had, any ties to the Iranian government.”

Yet, former and current content moderators reached out to BBC and claimed only about 10% of their decisions got audited.

On September 16, 2022, Mahsa Amina allegedly died at the hands of the Iranian morality police. In response, citizens took to the streets and expressed their outrage.

They soon started protests demanding their freedom. At the time of writing, the demonstrations continue to become more widespread and violent.

Unfortunately, IranWire said children counted among the hundreds of casualties. Iranian American human rights lawyer Gissou Nia said people are “demanding justice asking what Unicef is doing on the ground to stop this.”