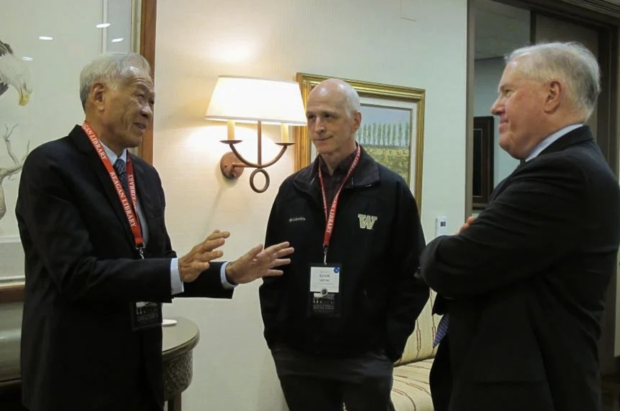 Singapore Defense Minister Ng Eng Hen is in California until Sunday to attend the forum, and will also meet key current and former US defense officials. PHOTO: NG ENG HEN/FACEBOOK via The Straits Times/Asia News Network

WASHINGTON – Defense leaders at a security forum on Saturday lamented the United States’ lagging economic engagement in the Indo-Pacific region, noting that it failed to keep up with China and even risked undermining America’s security presence in Asia.

The US should do more to engage Indo-Pacific countries economically and cannot focus on only its military presence in the region, said Singapore’s Defense Minister Ng Eng Hen at the Reagan National Defense Forum in California.

The legitimacy of America’s presence in Asia is predicated not only on the security it provides, but also the global system it builds that all countries benefit from, Dr Ng added at a panel on US cooperation with allies and partners.

“To situate American presence in Asia solely on Taiwan is a slightly more difficult proposition,” he said.

“The US increasing their military presence in Asia as a stabilizing force is virtuous, it’s good, and we will support that. We think the US should do more to engage, as it did previously, to build an economic framework, which as a tide it can lift all boats. And be careful on Taiwan,” he added.

Tensions between the US and China over Taiwan, which Beijing regards as a renegade province to be united with by force if necessary, has prompted unease in many capitals in Asia.

Washington is negotiating the Indo-Pacific Economic Framework, which covers 13 other countries and a total of 40 per cent of global gross domestic product (GDP). But it is not a traditional trade agreement and lacks market access, which is at the top of Asian countries’ wish list.

Dr Ng said there is currently a perception that “the US is against multilateralism” when it comes to economics because of its TPP withdrawal.

At the same time, China joined the Regional Comprehensive Economic Partnership, which covers a market of 2.2 billion people and a third of global GDP.

He added that America is doing quite a lot on the military front, from its Aukus security partnership with Australia and Britain to the Quad security dialogue among the US, Australia, India and Japan.

But he asked: “Is American presence in the Indo-Pacific primarily premised on security grounds adequate? Will it give you that kind of moral legitimacy that you had in the 1960s to the year 2000?”

He added: “America needs to… up its game in the economic sphere, whether it’s in Asia or globally.”

US senator Lindsey Graham, who was also on the panel, said domestic politics prevent Washington from joining global trade deals like the TPP.

“I want to be in Asia (but) the TPP is dead on both sides,” said the Republican lawmaker, noting that both former president Donald Trump and his political opponent Hillary Clinton campaigned against the TPP during the 2016 presidential election.

“We should have a multilateral partnership on the economic side in China’s backyard, but we don’t because the politics is not there,” said Mr Graham, who has pushed for foreign policy that gives America a bigger role in the world.

He added: “The strategy America has today on the economic front and on the military front to deal with expansionist China is woefully inadequate to the task.”

Dr Ng also said countries are skeptical of America’s push to decouple from China, arguing that the Chinese market is too big for the US to ignore.

Mr Graham, however, replied it is hard for the US to ignore the human rights abuses in China.

“In Asia, I’d like to have a more economic alliance than we have today,” he added.

America also remains committed to its alliances, said Mr Graham, but added that the US also wants other countries to do more and share the costs and burden of regional security.

“Other people should do more. We should not go in alone. Isolationism is fool’s gold, it’s fake security,” he noted.

Dr Ng is in California until Sunday to attend the forum, and will also meet key current and former US defense officials.

VP Harris tells Asia the US is ‘here to stay’