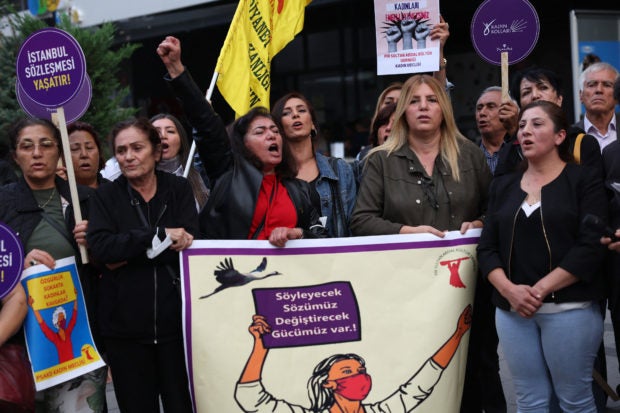 Demonstrators hold slogans during a protest over the death of Iranian Mahsa Amini and in solidarity with Iranian protesters in Ankara on September 28, 2022. AFP

Outrage over the death of Mahsa Amini sparked protests across Iran. The young woman was on a family trip to Tehran when the morality police arrested her on September 13.

They took her to a police station for “immodest clothing.” Amini, 22, was wearing her hijab or headscarf too loosely. Iran requires women to cover their hair completely when in public.

Unfortunately, Amini collapsed at the police station and died on September 16, 2022. As a result, accusations spread about the woman suffering head injuries.

How did Amini die?

The morality police denied they mistreated Amini and insisted she died of heart attack. On the other hand, her family members told the New York Times that she was healthy at the time of the arrest.

The family also claimed that Amini had no history of heart conditions. Moreover, they were not able to see her body before burial. Mahsa Amini’s funeral occurred in the Kurdish city of Saqez on September 17, 2022.

Iranians saw the young woman’s demise as part of the Islamic Republic’s heavy-handed policing of dissent. Moreover, they thought it was proof of the police’s increasingly violent treatment of young women.

In response, young Iranian women took to the streets and tore off their headscarves. They twirled them in the air as an act of defiance. According to the Associated Press, online videos showed two women throwing their hijabs into a blaze.

Another woman appeared in a clip cutting off her hair in protest. However, some demonstrators took a more violent approach. They faced off against police as thick plumes of tear gas rose in Tehran.

Iranian Women are cutting their hair and burning their Hijabs to protest the death of 22-Year-Old Mahsa Amini in custody.
Here’s what you need to know 🧵

Amazing bravery! In this recent video received from the city of Amol in Northern Iran, Iranians are defying the riot police, which are trying to run away. Iranians are risking their lives to say no to this regime. The West mustn’t negotiate with it#IranProtests #MahsaAmini pic.twitter.com/PT1EtGRD0j

Meanwhile, motorcycle-riding Basij forces chased and struck protesters with clubs. They are members of Iran’s Revolutionary Guard that have violently quelled previous protests.

Some demonstrators continue to cry “death to the dictator,” referring to Iran’s theocracy and Supreme Leader Ayatollah Ali Khamenei. They march on despite the threat of being arrested, imprisoned, or sentenced to death.

According to Reuters, the Iranian army vowed on September 16 that it “will confront the enemies” to enforce security. The country’s clerical rulers fear another protest like its bloodiest from 2019.

Earlier that day, state media quoted Iran’s Telecommunications Minister Isa Zarepour as saying that it might impose restrictions “due to security issues,” but it did not disclose more details.

International response to the protests

Iranian President Ebrahim Raisi pulled out from long-planned correspondence with CNN’s chief international anchor Christiane Amanpour on September 21. The foreign leader withdrew from the interview after Amanpour refused to wear a head scarf.

She grew up in the Iranian capital Tehran and can speak fluent Farsi. Amanpour said she wears the headdress while reporting inside Iran to follow local laws and customs.

However, Amanpour was going to interview President Raisi at the United Nations General Assembly in New York. Consequently, she would not need to cover her head outside the country.

And so we walked away. The interview didn’t happen. As protests continue in Iran and people are being killed, it would have been an important moment to speak with President Raisi. 7/7 pic.twitter.com/kMFyQY99Zh

On September 22, the United States imposed sanctions on Iran’s morality police following the alleged abuse of Iranian women. Moreover, it held the entity responsible for the death of Mahsa Amini.

Treasury Secretary Janet Yellen said, “Mahsa Amini was a courageous woman whose death in Morality Police custody was yet another act of brutality by the Iranian regime’s security forces against its own people.”

Also, US Secretary of State Antony Blinken had a separate statement regarding the incident. He said, “The Iranian government needs to end its systemic persecution of women and allow peaceful protest.”

An anonymous senior State Department official told reporters that there would be more upcoming actions. However, the official refused to share more details.

On the same day, Secretary Blinken called for internet freedom for the Iranian people in a tweet. Then, Starlink CEO Elon Musk heeded the call by replying, “Activating Starlink….”

The Iranian people would require immediate internet access to provide more accurate reporting of the situation. More protests incurred casualties the following week, but it delayed reporting on the situation.

On September 26, reports indicated that protests sparked in Tehran and other cities like Yazd, Sanandaj, and Tabriz. Teachers and students from more than 20 universities walked out of classrooms and went on strike.

The Iran Human Rights group said it recorded the deaths of 76 protesters from 14 provinces. On September 28, a tweet shared a message from the students of the University of Isfahan, “you have killed the students, yet you tell us to shut up!”

Students of University of Isfahan: ” you have killed the students yet you tell us to shut up!”

Many videos are circulating online showing the Iranian people preventing violence against women. CNN contributor Frida Ghitis shared the following video of a crowd reprimanding a man who slapped a woman:

This man in Iran slapped a woman. He thought he could get away with it. Things are different right now. pic.twitter.com/moHKrtKwkh