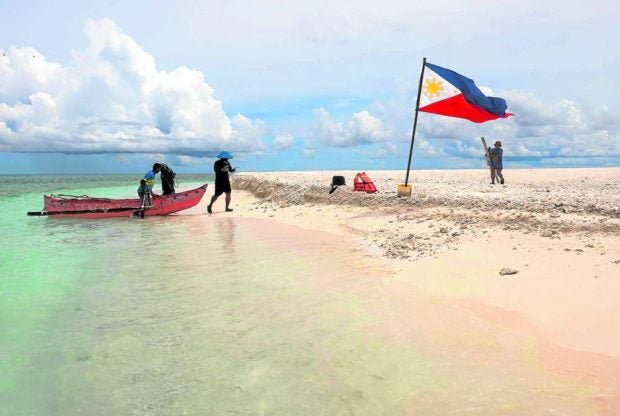 RAISE THE FLAG Members of the Philippine Navy plant the Philippine flag on one of four sandbars rising from the sea within the territorial waters of Pag-asa Island, part of
the Kalayaan municipality in the West Philippine Sea. China claims the sandbars, sending its coast guard to keep Filipinos away from the emerging islands. —MARIANNE BERMUDEZ

MANILA, Philippines — President Ferdinand “Bongbong” Marcos Jr. on Thursday said the Philippine government must find ways to overcome what he called the “roadblock” to explore oil and gas in the West Philippine Sea.

He was referring to China’s territorial claims over the West Philippine Sea, which he said has hindered the Philippines from joint oil and gas exploration in the region.

The President said the claims over the area by the Philippines and China have resulted in a debate on whose laws should be followed during a joint exploration.

(That’s the roadblock there. It’s difficult to find ways how we can resolve the issue.)

The President said the Philippine government must find ways to push through with joint oil exploration because the country needs it already.

(It’s a small thing for China. But for us, it is important. So we have to fight for it so that we can benefit if there’s really oil there.)

The previous administration, which was under former President Rodrigo Duterte, had completely terminated negotiations with China for the planned joint oil exploration in the West Philippine Sea.

In August of this year, Marcos’ Foreign Affairs Secretary Enrique Manalo said the Philippines is interested in reviving talks with China on the oil and gas exploration.