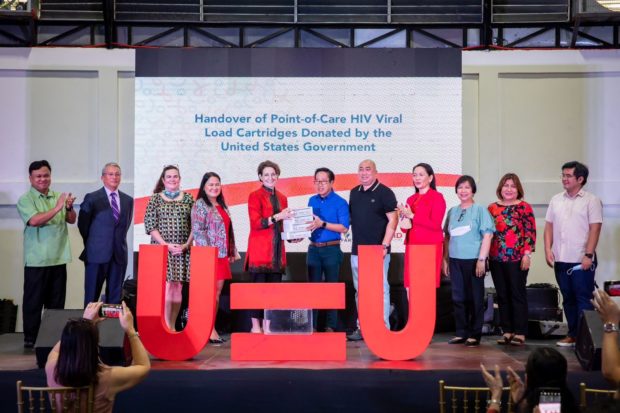 To commemorate World AIDS Day on December 1, US Ambassador MaryKay Carlson leads the symbolic handover of 86,000 HIV viral load testing cartridges to the DOH with the PEPFAR Philippines Interagency in the presence of Senator Risa Hontiveros, Manila City Councilor for Health Dr. Louisito Chua, DOH Usec. Carolina Vidal-Taiño, representatives of the Metro Manila Center for Health Development, and members of the people living with HIV community. (Photo courtesy of US Embassy)

“These laboratory tests are further proof that the US government is committed to working alongside the Department of Health (DOH), the community of Filipinos living with HIV, and local governments like Manila City to ensure that people living with HIV in the country have equitable access to a viral load test,” she said in a statement.

“With this donation, we aim to amplify the hopeful message of U equals U: that undetectable is indeed untransmittable,” she added.

The cartridges, which will be distributed to HIV treatment hubs and facilities across the archipelago, are expected to cover the viral load testing requirements for all patients undergoing HIV treatment for a year in the country.

For her part, DOH officer-in-charge Maria Rosario Vergeire said that the donation “will be pivotal to the country’s HIV treatment program.”

The US government has given over P1 billion to the Philippines to support HIV prevention, case finding, and treatment interventions since 2020.

$5 million from US to boost COVID vaccine rollout

USAID donates P23-M worth of books for Bicol Region students