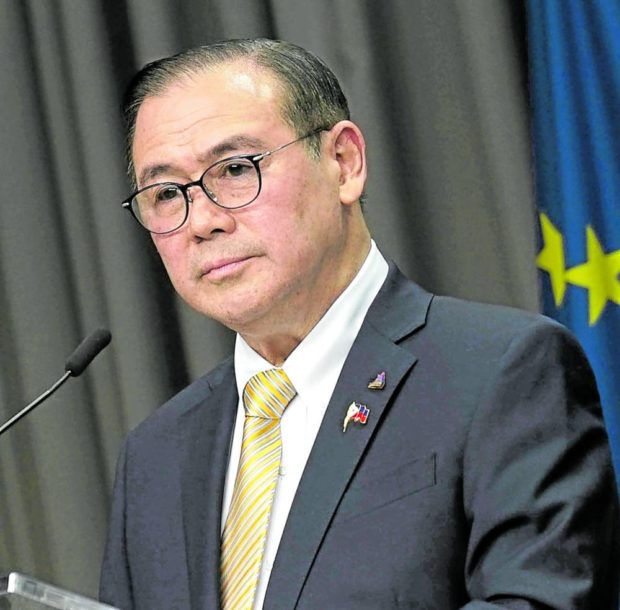 The negotiations for the planned joint oil exploration between the Philippines and China in the West Philippine Sea (WPS) have been completely terminated upon instructions of President Duterte, Foreign Secretary Teodoro Locsin Jr. announced on Thursday.

“The President had spoken. I carried out his instructions to the letter: oil and gas discussions are terminated completely. Nothing is pending; everything is over,” Locsin said in his speech during the 124th founding anniversary celebration of the Department of Foreign Affairs (DFA).

“Three years on and we had not achieved our objective of developing oil and gas resources so critical for the Philippines—but not at the price of sovereignty; not even a particle of it,” he added.

According to the country’s top diplomat, just because the two countries “have differences does not mean we have to fight over everything.”

In that spirit, Locsin said he tried for three years to come to an agreement to facilitate exploration for and exploitation of oil and gas in the West Philippine Sea.

“We got as far as it is constitutionally possible to go. One step forward from where we stood on the edge of the abyss is a drop into constitutional crisis,” he said.

“That explains the sudden pull-back on my part which unraveled three years of sincere hard work on the part of (Chinese Foreign Minister) Wang Yi and me. We had both tried to go as far as we could—without renouncing China’s aspiration on his part; and constitutional limitations on my part. I shut down shop completely,” Locsin said.

He said it remains with the new administration to protect the country’s sovereignty “all the way to the wire.”

“Surrender of any portion of Philippine sovereignty is not an option. Not for love; not for money,” Locsin said.

In April, the Department of Energy (DOE) ordered the suspension of oil exploration activities in the West Philippine Sea.

The order came a month after President Duterte, during a public address, said the country had no choice but to abide by a supposed joint exploration deal with Beijing to avoid conflict, and that someone “from China” had reminded him of this upon learning of other companies’ planned activities in the area.

Mr. Duterte added that the same person also warned him that Beijing would send soldiers to the West Philippine Sea should he deploy the military there.

The DOE order effectively stopped “all exploration activities” for Service Contracts 72 and 75—two sites off Palawan province earlier identified by the government as possible areas of joint energy exploration with Beijing—pending a go-signal from the Security, Justice and Peace Coordinating Cluster which cited “the political, diplomatic and national security implications of any activity in the West Philippine Sea.”

As a result, PXP Energy Corp. and its subsidiary Forum Energy Ltd.—which had been hired by the government to conduct exploration activities—had to declare a force majeure, saying the order prevented them from “performing their obligations.”

China has been known to intimidate South China Sea claimants conducting energy exploration activities to pressure them into accepting joint development deals, according to critics.

On negotiations for a code of conduct in the South China Sea, Locsin said the Philippines insisted that “it does not concede Chinese supremacy to the exclusion of other powers on a pacific footing.”

“To be fair, China has never asked for that,” he said.

“If her interest is harnessing the stopping power of water to stall an attack on herself, then littoral states like ours can give her ample forewarning. We have a mutual defense treaty with our only conceivable military ally,” said Locsin, referring to the United States.

“We have no joint aggression pact with any power. To every intrusion we responded with protest; if it comes to it, we will answer with action,” he added.

Locsin said Mr. Duterte and Defense Secretary Delfin Lorenzana had given him “the start of a credible retaliatory force, and thereby helped me turn our foreign policy into a fist in the iron glove of the armed forces.”

In upholding the rule of law, he said the country held on to the United Nations Convention on the Law of the Sea and the 2016 arbitral award, which he called the “twin anchors” of the Philippine position on the West Philippine Sea and the South China Sea.

“Without the rule of law, none can thrive nor long survive the resulting anarchy. And no—the game of anarchy does not always go to the strongest. The weaker can strike up an alliance with a yet stronger—to keep the bone of contention for itself or deny it to all,” he said.

“But let me say one thing: we have not surrendered a single inch of territory or a drop of our waters. Not by word or deed have we weakened our right to everything in the West Philippine Sea.

Without inviting pity by asking, we achieved an international consensus that right is with us and might cannot ever take it away. In the 21st century, the first incontestable and most significant victory at sea is Filipino,” Locsin said.