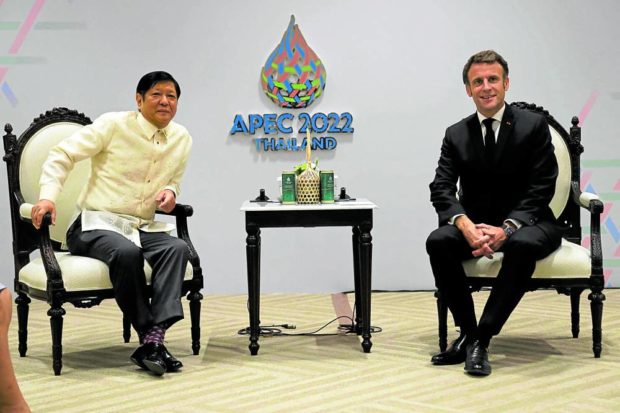 BANGKOK — President Ferdinand Marcos Jr. wants to develop nuclear energy in the Philippines in partnership with France, saying the European nation has an extensive experience in nuclear power production.

Marcos made the remarks on Friday after his meeting with French President Emmanuel Macron on the sidelines of the Asia-Pacific Economic Cooperation (APEC) Summit here in Bangkok, Thailand.

The president said the Philippines could rely on France’s “quite extensive” experience “if it goes ahead with a partnership on nuclear energy,” according to the Office of the Press Secretary.

France, which has 56 nuclear power plants, is Europe’s largest net exporter of electricity.

“I’m very confident that it will be a strong partnership simply because … 67 percent of their power production is from nuclear energy, so they are very, very used to it,” Marcos said. The Philippine leader has been considering the construction of nuclear power plants to supply the country’s energy needs.

During the presidential campaign, Marcos said he wanted the government to revisit the possible revival of the mothballed Bataan Nuclear Power Plant (BNPP), which was built during his late father’s dictatorial rule.

The $2.3-billion 620-megawatt power plant was conceived in the early 1970s and the American company Westinghouse Electric began building it in 1976.

It was completed before the president’s father and namesake was ousted in 1986.

But the BNPP was never fueled because of public fears caused by the Chernobyl nuclear accident in 1986 and charges of payoffs and corruption in the overpriced power plant.

The government continued to pay for the foreign loans for the BNPP years after the 1986 Edsa People Power Revolution.

France happened to be the first country that recognized the new government under President Corazon Aquino, who mothballed the BNPP due to safety concerns.

Environmental groups and some scientists continue to oppose the revival of the nuclear plant. But in a recent speech, Energy Secretary Raphael Lotilla urged the National Power Corp. (Napocor) to explore new opportunities to strengthen the energy sector through nuclear power.

“As we go down the road and consider new opportunities in modular nuclear [energy] or even the future of fusion as a source of power, these are the opportunities that [Napocor] may look into,” Lotilla said early this month.

Small modular reactors are advanced nuclear reactors with limited capacity (70 megawatts) which can be shut down and self-cool for an indefinite time if needed.

If Napocor is unable to pay for rising fuel prices, it might result in the shutdown of diesel-fired power plants in missionary areas.

Marcos said he had “a very extensive and quite productive meeting” with Macron, who invited him to France “when the time comes.”

France has been joining military exercises in the region as an observer and there has been an increased French presence in the Asia-Pacific region, according to Mr. Marcos.

“Of course, we discussed some of the regional issues that are impacting upon the economy and the worries that we have for the future and the partnerships that are developing between even far-off places, what we used to regard as far-off places like France and the Philippines,” he said.

On Saturday, Marcos had a bilateral meeting with New Zealand Prime Minister Jacinda Ardern, whom he described as his “idol.”

“You were a beacon of light during the pandemic. When we didn’t know what to do, you were very decisive,” Mr. Marcos told Ardern.

The two leaders expressed commitment to improve the welfare and to address the needs of overseas Filipino workers.

Marcos told Ardern that “diaspora has really become a significant part of our culture,” adding that “we go where the work is.”

Marcos also met with Australian Prime Minister Anthony Albanese, who told him that their two countries had “good economic ties” and “good relations,” including people-to-people contacts.

“As you say, the connections between Australia and the Philippines have been long-standing and have become stronger and stronger. We have a sizable population in Australia of Filipino nationals. And many of them have already taken Australian citizenship and dual citizenship,” Marcos said in response.